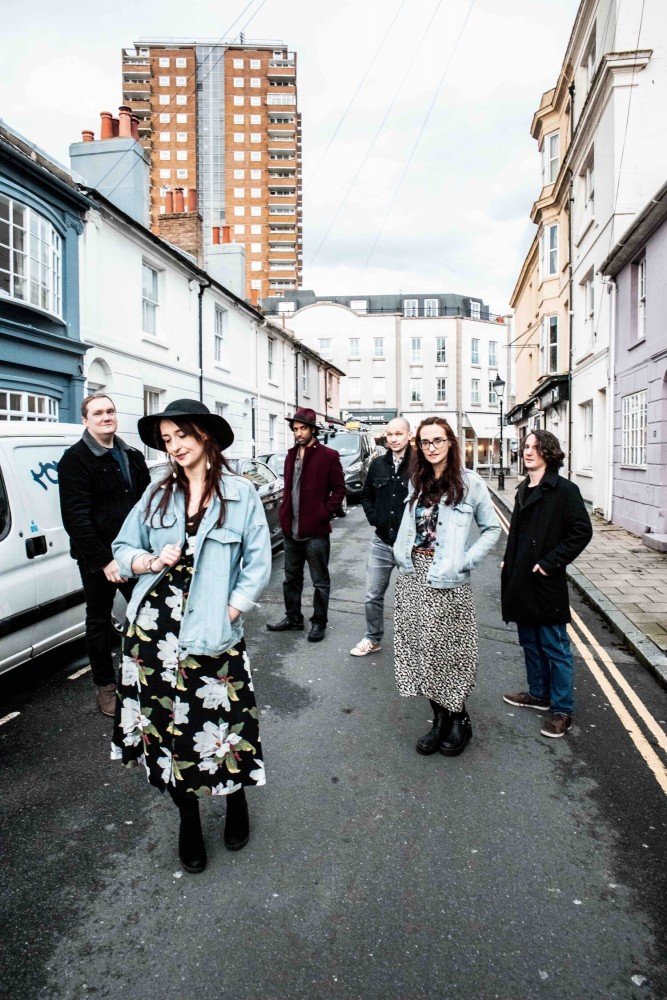 Twins Helen (vocals, flute) and Nicola (vocals, acoustic guitar) having performed as the duo The Frisbys for years in South London. In 2013, university friends Same Keer (electric guitar) and Marc Robinson (acoustic guitar) joined The Frisbys. Seeking a fuller sound, over the last several years, more friends were added: Tom Finegan (drums), Will Cattermole (bass), and Sal Palekar (violin, piano). Although Robinson has since left the band, he joins The Frisbys on their latest EP My Wicked Mind which was released on June 26.

In the press release announcing the EP, My Wicked Mind is described as “a collection of songs that explore both the inner turmoil and resolute strength of the human mind. Each song combines hook-laden melodies with powerful lyricism in order to create a sound that is utterly striking. Whether its the urgency of “I Heard,” the delicacy of “Print” and “You Are,” the joy of “Gretna” or the bittersweet charm of” Lead Me To The Water,” there’s no denying that My Wicked Mind will take the listener on a unique journey of emotional discovery.”

Nicola fills us in on their new EP and the band.

Your new EP My Wicked Mind dropped on June 26. What can our readers hear?
Expect uplifting harmonies, emotive lyrics, intricate instrumentals, and hopefully an EP that will keep you listening!. We try to make our music diverse, interesting, and slightly unexpected.

The single “I Heard” released before the album and received a great deal of attention. Share with us how you approached the songwriting process for this EP.

As a band, we don’t feel constricted to write in a particular genre, and at times this has made it hard to label our music. For us, every song has its own style and story. My Wicked Mind is a good example of this. There are elements of folk/country/rock/pop/rockabilly/Americana throughout, but we feel it still represents what we’re all about.

Helen and I are the main songwriters. We write separately and together and have a lot of input into each other’s songs. The great thing about being a twin is you can be as brutally honest as you like about each other’s ideas and still know you’re not going to hate each other at the end!

Once we’ve worked on ideas for a new song, we will bring them to the band to develop further. This will involve working out parts, rearranging sections, and just generally building in complexity. Sometimes they change format completely. “Print,” a piano ballad and definitely our simplest song on the EP, originally began its life as a rock song!

The Frisbys made the switch from performing as a duo to a full band. What inspired the two of you to add new members?

Although Helen and I performed for several years as a duo, it was only after university that we started taking it seriously. I sent a demo to our friends, Sam Keer and Marc Robinson, in 2012. After hearing it, they instantly asked if we’d like to become a four-piece. It was a no- brainer really. The boys’ talents as musicians enabled us to develop our sound into something much more complete. We released our first EP Philosolove in 2013 as a four-piece—recording everything at home. It was very DIY, but I think it was its simplicity that made it so special to us.

In 2015, we started to realise that we were writing more ambitious material and that we needed a fuller band sound to realise this. It was at this point that we recruited our school friends Tom Finigan, Will Cattermole, and Sal Palekar to complete the line up with drums, bass, and violin. It was the best decision we could have made. As soon as we began to rehearse together, they just added so much energy to our sound!

Tell us more about your bandmates.

There’s so much to say about them! They’re amazing, incredibly creative, and can play just about any instrument. Helen and Sam got married recently, and the band plus some friends played some songs at their reception. Everyone was in awe as the boys moved from drums to bass to piano to guitar. They’re incredible. And more importantly, they make being in a band fun, which is all you can ask for really.

We’re really missing them at the moment. It will be so great when we get to rehearse and make music with them again!

Your bio states you’ve been making music since you were old enough to speak.  How did you both get involved in music?

Our family is pretty musical. Our mum, dad, and brother all sing or play instruments, so music has always been a massive part of our life. When we were younger, Helen and I would spend hours singing—harmonising to every song we knew. I’m sure it was incredibly irritating, but our family put up with it like troupers.

When our brother was about fourteen, he got a guitar and started writing songs. We were about eleven at the time and thought if he can do it, so can we! It started from there really although it wasn’t till college that we started performing properly. Our Music Technology teacher secretly signed us up for a battle of a band’s competition. I’m not sure we would have had the confidence to start without his early support.

What instruments do you play?

We both play a number of instruments (to varying degrees of success!), but in the band, I (Nic) play acoustic guitar, piano, and sing. Helen plays flute, piano and sings.

Who were your early musical influences that inspired your sound?

We all have very eclectic tastes in music which delve into pretty much every genre imaginable. Personally, my songwriting has been inspired by a range of artists; grunge acts like Blind Melon and Stone Temple Pilots to female singers such as Ella Fitzgerald, Fiona Apple, and Carole King. Fleetwood Mac, too, has been a huge influence, as has Simon and Garfunkel and the Beatles. Laura Marling and The Staves also played a big part in the early days of our band when we were sitting more firmly in the folk category. A little bit of everything.

I’ve gotten really into reading over the last few years. It’s a skill I lost until recently. I’ve lost count of how many books I’ve gone through since lockdown began! I love being creative, so I am trying to use the extra time to paint, draw, and write short stories. I’m not sure if they’re any good, but they keep me occupied! I also love walking and being outside as much as possible, so in many ways, lockdown suits me. I miss performing music, however, and can’t wait to reschedule our EP launch for as soon as possible!