Home Interviews The Van T’s from Glasgow on songwriting, grunge and gear 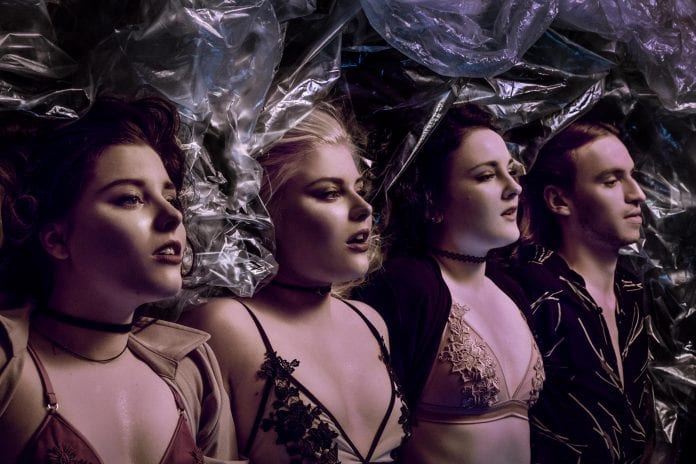 The Van T’s of Glasgow are a four-piece band comprised of twin sisters Hannah and Chloe Van Thompson on guitars and vocals, Joanne Forbes on bass, and Shawn Hood on drums. The band released their latest single “Bittersweet” earlier this year and has said to be one of “the most exciting young bands in Scotland.”  This year, the band supported The Jesus & Mary Chain in Amsterdam at Paradiso, played with Clean Cut Kid at London’s Scala, as well as two packed shows at Great Escape. This month they made appearances in the UK at the North Britain Festival in Stockton, The End Festival at The Social in London, and Jimmy’s in Manchester.

Hannah filled us in on how the band was formed, their music, songwriting, grunge music, gear, and more.

Hannah and Chloe, you both have been playing together since around 2013. When did you form the current band lineup of The Van T’s and how did Joanne and Shaun join you two in forming the band?

I (Hannah) met Shaun when I worked in Primark around 2011. I knew he played drums and simply asked him if he wanted to join the band, and we’ve been stuck together ever since! We met Joanne through Glasgow’s music scene around 2013/2014 and when her band at the time split up, I swooped in and asked her to play bass with The Van T’s.

“Bittersweet” was released last month as a follow-up to “Fresh Meat.” What’s the story behind those two songs, tell us about the filming of “Fresh Meat.”

‘Bittersweet’ was written around nine months ago. I wrote the song around the time I was feeling hopeful about life again and the great things that were happening to us as a band surrounding that time. Although we are still faced with our demons in life, sometimes it’s cool to appreciate the good things.

‘Fresh Meat’ has a darker feel to it, written around an incident from a night out, and I guess you can probably hear the angst in the song. But we really like the vibe and are particularly fond of the chord sequence throughout the song.

The video for ‘Fresh Meat’ was filmed in May. It was directed by Tim Courtney. We spent hours on end drenched in fake blood and bathing in a bath filled with milk. Not the most comfortable we’ve ever been, but we are really happy with the outcome of the video and especially the response with it.

Your last EP Coming of Age was released last year. With the two new singles released this year, will you be coming out with another EP or album soon? And, if so, when can fans expect that?

We are hopefully working toward both an EP and LP. The LP may be a longer wait though. We are recording very soon, so we will be presenting new material within the next couple of months.

What is the band’s writing process?

I will usually come up with the music, i.e., chords, riffs, melodies, vocals, and structures of songs on the go. I find it difficult to dedicate time to actually writing. I find myself always writing when I’m working or out and about.

You recently toured with Wolf Alice and The Jesus & Mary Chain. How were those experiences?

Both really surreal. They are both very influential bands to us and both really lovely bands. Wolf Alice were round at our flat when they played two nights at the Barrowlands and managed to get a game of twister and musical statues in.

I’ve seen a lot of positive feedback on social media thanking you for bringing back grunge, although some would argue it was never gone. Who inspired your style of music?

That’s such a compliment to be honest as it is one of Chloe and I’s favourite genres. I guess grunge music was primarily ‘90s. Music always takes its turn in coming back, it’s like fashion. We never set out to be a grunge band to be honest, it’s just simply the music we love to play which sounds grunge-esque.

We love Pearl Jam, Smashing Pumpkins, The B-52s, Kate Bush, My Bloody Valentine, Cocteau Twins and The Yeah Yeah Yeahs, to name a few (too many).

You’ve been compared to bands like Wolf Alice, Hole and Veruca Salt to name a few. For people that aren’t familiar with your music, describe it for us in your own words.

I find that the hardest question; we really enjoying playing more Indie/Alternative styles. We try to still have that Pop element (everyone loves a pop song).

Your music definitely changed since forming a four-piece band. What brought about the change?

I think it’s simply down to maturing and consistently writing.

When did you both begin playing guitar and what motivated you to pick that instrument?  Do you play any other instruments?

I think we were around 13/14 when we started playing guitar/bass. I also dabble in piano/keyboard, I’m currently trying to learn drums and it’s proving quite difficult, but will hopefully get there with some perseverance.

There’s a lot of heavy guitars in your music. What gear did you use on the last two singles?

Yes, generally there were a few distortion and boost pedals used throughout the recording and we swapped around with some until we were happy with the sound. Both songs were written in Drop D which we find you can create a diverse dynamic, i.e., create a bigger or more ambient sound. We used a lot of reverb throughout the two songs usually running through an Electro Harmonix Cathedral pedal or Marshall Reverb pedal (reflector). I’m pretty sure during recording the amps we ran through were primarily Orange (head+Cab) and Vox.

What’s your set-up for live shows?

My set up is usually my Japanese Fender Mustang, my favourite guitar to play. Pedals-wise, I usually swap between my Rat or Boss DS-1 for distortion. I usually accompany with a Boost pedal. I’m a sucker for Marshall pedals, which I use their chorus (regenerator) and reverb (reflector). One of my favourite pedals has to be my Flashback Delay by TC Electronic, it’s a nifty little guy. These usually run through my solid-state Orange amp.

Chloe’s board is filled with too many pedals and a power supply, that’s a lead guitarist for you. She mostly uses boosts and overdrives. Her favourite one is The Boss Super Feedbacker pedal which generates a natural sounding feedback live. She also uses a lot of different modulation pedals as mentioned previously. She plays a Fender Modern Player Thinline Telecaster through a Fender Blues Junior combo.