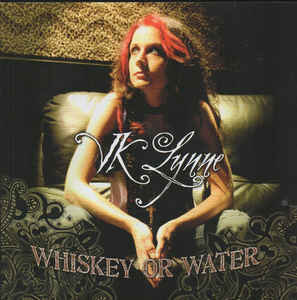 VK is a chick who likes to create art in various mediums, paint it lots of colors, cut it into pieces, then glue it back together into Festive Party Hats.

Her songs have appeared in feature films All Alone and Forever No More, which are currently doing well on the film festival circuit, as well as the award-winning web series, Trading on 15, which she also wrote and directed.  I was fortunate enough to attend the Hollywood Premiere of Trading on 15 which was a fun and exciting event.

VK is also a founding member of Eve’s Apple, a collective of professional female rock, metal, and gothic singers. Currently, her song “Dust Between the Dirt” appears on their compilation CD, The Siren’s Garden.

She sings lead for the symphonic gothic metal band, Vita Nova, and the alternative metal band, The Spider Accomplice, both of which will be releasing new albums in 2012.

VK is also a co-host on the weekly ‘The List’ Music Podcast.

Recently, VK spent some time with us hanging out and playing some music. It was a great time and we highly suggest you make it out to a show of hers to respect and appreciate her talent.

VK, when did you start your musical career?

I started singing seriously when I was 12, but didn’t commit to rock and roll until I was about 18…that’s when the Doc’s and flannel became part of my uniform. 🙂

Can you tell us who are/were your musical influences?

You’ve written some awesome music, with one of our favorites “Whiskey or Water.” How are your songs inspired — life experiences, poetry, other?

My mistakes are excellent fodder for art.

Where do you see yourself in the next five years?

Making music with my bands….I’ve been very busy this year and have some new projects in the works….;)

Can you tell us what those projects are?

In May, my international band, Vita Nova, will release its first EP. It’s very unique; I’m co-writing all the material with guitarist/composer Federico Salerno in Milan, Italy. We have several guest appearances; as of now, there are 14 artists from five different countries coming together via email files and Skype on this project.

That’s wonderful news, VK, and we look forward to hearing more about Vita Nova.  For now, where can fans catch a live performance of VK Lynne?

My Los Angeles band, The Spider Accomplice, will be out in Hollywood this summer!

Thanks, VK, for taking the time to chat with us and we look forward to your new projects!