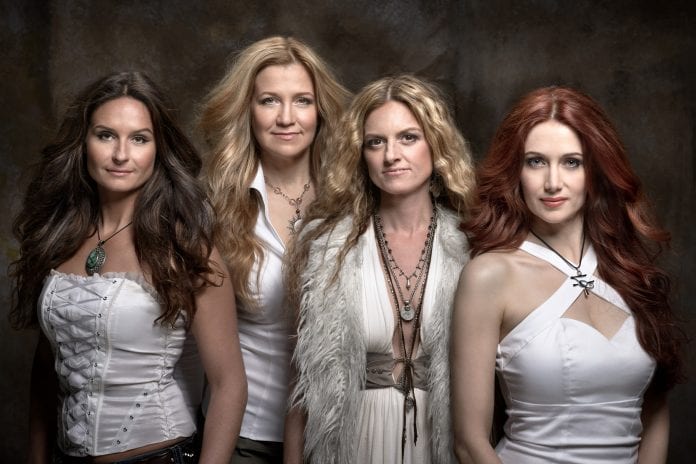 With over 46,000 Facebook likes, 3 million plus views on YouTube, and more than a decade rocking the stage, Zepperella is one of the most popular tribute bands out there. Their fame and talent scored the band arena concerts opening for bands like Weezer and Kiss, too. They consist of founding member and drummer, Clementine, guitar player Gretchen Menn, bass player, Angeline Saris and singer, Noelle Doughty. Guitar Girl Magazine cannot get enough of the all-girl tribute bands, and had the chance to meet up with a few of the members to ask them some questions.

GGM: How long have you been playing music together as a band? Do any member(s) play or played in an original band?

Clementine: “The band has been together for 11 years. Gretchen and I played in a band for 3 years before forming Zepparella. Angeline and Noelle joined 4 years ago. We all have original projects!”  www.clemthegreat.com

Angeline: “I do have an original project.  We released one single called Blackstrap Molasses and are writing and recording more tunes right now.   I’m hoping to release another single by the end of the summer!”  www.angelinesaris.com

RELATED STORY:  Interview with Angeline Saris; Music, Gear, Skydiving and the Future of Women in Music

Gretchen: “Clementine, Zepparella’s drummer, had the idea to start the band about 11 years ago. I have been on board from the beginning. Zepparella has had a few different lineups, and the current one has been together about four years. We all have original projects and play in various other bands. My first solo album of original, instrumental music, Hale Souls, was released a couple of years ago. Angeline played bass on the first track, “Scrap Metal.” I’m currently working on my second album, and hope to have it finished in the next few months.”  www.gretchenmenn.com

GGM:  How did you all meet?

Gretchen: “I met Clementine because we were playing together in another project together–an AC/DC tribute band. She mentioned she was thinking about learning the music of Led Zeppelin, and I signed up for it immediately. I have always loved Led Zeppelin. I met Angeline through a mutual friend, and Noelle backstage at a Robert Plant show… if that is serendipitous enough!”

Clementine: “The one in Northern Ontario Canada, at the home of some amazing people who built a venue on their own property, sticks with me. Such an amazing example of people who create their own fun!”

Angeline: “I guess it’s kind of strange but I can’t think of just one memorable show! They all stand out in their own unique sort of way and are chocked full of sweet memories both musically and from meeting new people after the show.”

Gretchen: “I could never pick one! There have been so many, many memorable shows for various reasons. Opening for Weezer was a great thrill. It was the first time I had been in front of an audience that big, and was shocked to look up at one point during our set, playing in front of an ocean of people, and seeing a close up of my hands on the megatrons. The thought that went through my head was, “I really hope I don’t mess up right now.” And Weezer was absolutely fantastic! I had never seen them live before, and they killed it.”

GGM: How do listeners respond to an all-girl band?

Aangeline: “I think people are generally responsive in a positive way. We are in a unique time where the world is really excited to see women forging new grounds in lots of different fields, including music.  Plus, we get to play the music of Led Zeppelin! I think we have that on our side for sure.”

Gretchen: “I rarely think or am conscious of gender issues. I assume people who have a problem with female musicians aren’t likely to show up at a Zepparella show, and I fully support that. I play music because I absolutely love it. I am constantly striving to evolve and grow as a musician, composer, and performer. I try to bring my best to all I do. I recognize that I’m a work in progress, but I love to work. If people feel empowered or inspired or appreciative of what I do, then I’m thrilled and deeply honored.  If people don’t like it or if it pisses them off, then isn’t it great there is such a huge variety of music available? No one needs to suffer something artistically they don’t like. Music is very special in that it has the power to unite, to comfort, to inspire, to give meaning or perspective to difficult situations. Yet the worst it really can do is annoy or irritate if you don’t like the song or genre or artist. And in almost all cases (bartenders and sound guys are often held captive), you can almost always easily escape music that rubs you the wrong way. It is generally one power switch away. That is about as low of a risk for as high of a potential payoff as anything out there!”

GGM: Who are some of your other musical influences?

Angeline: “So many! Classical music and Opera, Maltshop Oldies, Jazz (in a big way!), 70s disco and funk, 80s rock music, hip-hop, Motown, metal, reggae, dub step and of course classic rock. I feel that good music surpasses genre and for that reason am influenced by just about everything!”

Gretchen: “I’ll try to limit these to the absolute essentials! Rather than calling them influences, as it seems to imply that I would presume to compare myself to them, I’ll say here are some of my absolute favorites who have informed my taste, approach, and whose music moves me deeply and inspires me to keep learning: Steve Morse, Eric Johnson, Jeff Beck, Django Reinhardt, Jimmy Page (obviously!), Frank Zappa, Daniele Gottardo, Mozart, Beethoven, Stravinsky, Debussy…”