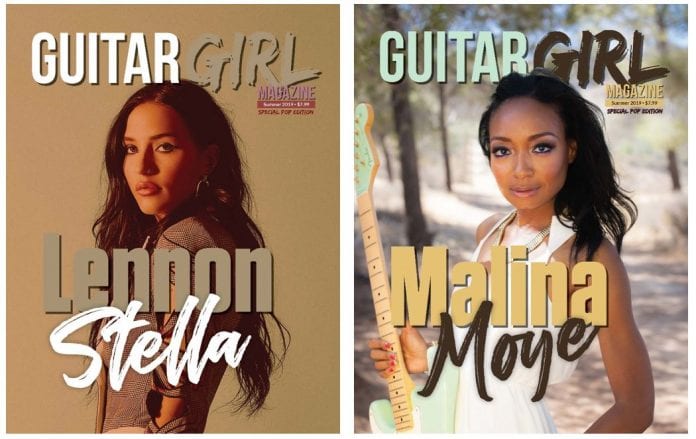 Welcome GGM readers! We have a big show in store for you with our special POP music edition and just in time for your summer reading. In this special edition, you will hear from 19 artists who fill our world with variations of “pop” music from indie to folk, rock, jazz, blues, soul, country, dream, and more.

Starting with our two cover artists Malina Moye and Lennon Stella, Moye plays her Fender left-handed and upside-down fusing blues, funk, rock, and pop. Most know Stella from the hit TV show Nashville who has now ventured into her own successful career as a pop starlet. We are also featuring pop star Maggie Lindemann who recently decided to learn to play guitar. Then we have the iconic KT Tunstall who recently released a video for the single “Little Red Thread” from her highly acclaimed studio album WAX. The consummate guitarist Jackie Venson fills us in on her new album Joy and chats guitar tone, while Meiko tells us how life in Germany is going and talks about her new album In Your Dreams.

Folk-pop artist Lucy Spraggan was the most Googled artist of 2012 due to her performance on America’s Got Talent and released a new video for the single “Lucky Stars.” Walking into a Gibson event in Nashville last month, I was blown away by the guitar playing of Sarah Zimmerman of the duo Striking Matches. Carolina Hoyos is not only an accomplished DIY indie musician, she’s a working actress, host, director, and philanthropist. Rachael Sage is a pianist and guitarist and owns her own record label, MPress Records. Sasha Vallely is a local Atlanta artist that has been performing across the globe for over a decade with bands such as Sash The Bash, Midnight Larks, Spindrift and The Warlocks, composed film scores, and has been featured in films and documentaries.

We have some sister groups with Crimson Apple made up of sisters Colby, Shelby, Carthi, and Faith Benson from Los Angeles, and the country duo from Texas, Wild Fire featuring sisters Kayla and Kelli lutzwig. Up-and-coming artists to the pop scene with their own variations of the genre are Destiny Petrel, Kat Holland, Luna Shadows, Mogli, Sophie Auster, and Hailey Knox.

As you read the interviews in this issue, you will find variations to the genre known as “pop” with each artist serving their own spin making their music unique unto themselves. The lyrics in these songs have real meaning and they tell their stories in both direct and abstract ways all the while making awesome music by pushing the pop boundaries.

Sit back and relax while you enjoy this ad-free, interview-only special edition!