Home Lifestyle Ask Alexx Ask Alexx: Advice for the DIY musician to take their career to...

I live in a small town and have been gigging and doing everything DIY for the past couple of years and seem to be getting nowhere.  What do you think would be the next best thing for me to do?  YouTube channel with covers, move to a bigger city, hire a publicist?

~ Lost in a Small Town

Dear Lost in a Small Town,

Let me first start off by saying I feel your pain! These days, it’s easier AND harder than ever to get your music out there as a 100 percent indie artist. What we have now that we didn’t have before is social media, which is a great tool for getting your music out there to the masses, but the problem is, everyone is using it. How do you differentiate yourself from all of the other people who are doing the exact same thing?

The answer is, it’s a multi-pronged effort, and it’s going to take a huge investment in terms of time (and probably some money). Unfortunately these days, you need to spend a good majority of time on branding and marketing in addition to just being a good musician.

Would I hire a publicist? Perhaps. The problem is though, that they usually start around $1K a month. I’d say if you’re going to go that route, maybe do an isolated campaign with them, for a single or album release. Also, ask around and get a good recommendation on one from friends. Ask them about their results, and which publications they were actually able to place them in. If you’re on a budget and you want to be able to target your own publications, research some zines or blogs that cover music like yours, and write directly to one of their writers to ask for a review or feature. First, though, read some of their past work and comment on it when you write to them. Make it a personalized message. No one likes to feel like they’re being networked with. Make a friend. Build a relationship. That’s what publicists do, and their relationships are what you pay them for. Expanding on that, don’t ever do a blanket email to a list of writers, labels, or anyone that you ever plan on working with. That’s the fastest way to get blocked or for your material to go right into the trash.

Moving to a bigger city isn’t necessarily the right answer. Being a big fish in a small pond definitely has its perks, and with the Internet, you can reach so many more people than just the ones in your small town. Doing some covers for your Youtube channel is a good way to draw in some new fans. You can also pepper some of your originals in once you’ve hooked them.

Here are some other immediate things you can do to work your existing social media pages and official site. Learn a bit about SEO or hire someone to do it for you. It’ll boost your Google ranking so you’ll come up higher in searches. Post content with consistency. If you don’t have time every single day to create content, pick one day and spend it making a bunch of promo or live performance videos. Then, you can schedule it over the course of a week with scheduling tools like Later. You’ve got to keep the machine well oiled. Have fun with it. You don’t always have to post something music-related, and you shouldn’t because people not only want to get to know you for you, but they don’t want to feel like they’re constantly being marketed to.

I sincerely hope this helps you on your journey. Most importantly, don’t feel discouraged. Even the people at the highest levels are trying to figure out what to do and how to draw new fans to their content. Just be you, keep material coming, and be willing to learn some new skills, like video editing and maybe the Adobe Creative Cloud Suite, and ask questions of people who are more successful than you! People are more willing to help than you think, myself included!

Alexx Calise is an accomplished singer, guitarist, and songwriter. Perhaps best known for her hit song, “Cry”, which became a staple on the show “Dance Moms” and boasts millions of hits on Youtube, Calise’s raw emotion, heart-and soul-lyrics, and unmistakable vibrato have impacted thousands of young girls all over the world. Calise is currently working on new solo material and songs for licensing and recently released a new EP with another music project, Batfarm. In addition to her musical pursuits, she also works in public relations and marketing and owns her own party entertainment business. When not playing shows or writing music, she enjoys horror movies, exercising or taking a well-deserved nap.

Have a question for Alexx?  She has an answer!  Email [email protected] 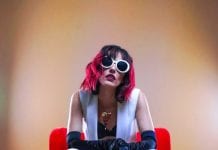