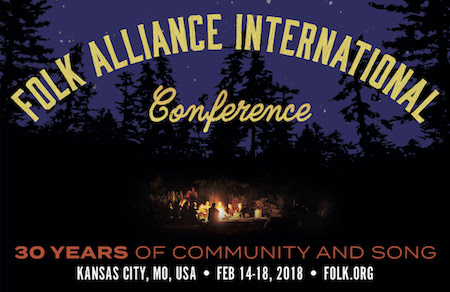 From its humble beginnings at the first meeting in Malibu in 1989 with 130 people in attendance, to 2018’s recording breaking 2,750 attendees from 25 countries, the organization has firmly solidified its mission to nurture, engage, and empower the folk music community.

“We couldn’t be happier with the attendance, program, and response to our 30th conference. Our goals were to honor the past, celebrate the present, and firmly set course for the future; we met them in spades. Onward to Montréal in 2019,” said Executive Director Aengus Finnan.

Bringing together global music leaders, musicians, educators, and industry professionals to share ideas, network, and promote folk music; the annual Folk Alliance International conference is the world’s largest gathering of the folk community. It is a unique annual event and is known for its community atmosphere, nurturing ethos, and as an industry hotspot for new talent discovery.

* International Folk Music Awards: Presented awards for Lifetime Achievement, Spirit of Folk, and member-voted ‘Best of 2017’ for Album, Song, and Artist of the Year. In a permanent commitment to honor the socially conscious roots of folk music, the People’s Voice and the Clearwater Awards were also presented to Bonnie Raitt and the Winnipeg Folk Festival, respectively. Three inductions were made into the Folk DJ Hall of Fame.

* CommUNITY gathering addressing Harassment and Discrimination in the Music Industry. A helpful bystander training was facilitated by MOCSA and The DB Approach.

* Committing to a Safe Music Community pledge created by FAI’s Advocacy Committee was signed by hundreds of conference attendees including the Board of Directors.