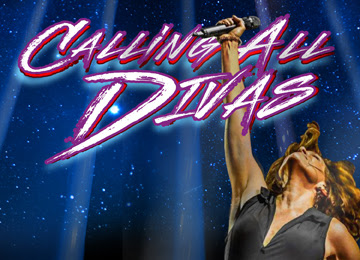 Directed by Michael LaFleur and executive produced by Dennis D’Amico, CALLING ALL DIVAS makes its “Exclusive Preview” performance Thursday, June 7 at the Theatre at St. Jean in New York City and is ready to tour. The show stars four very different and remarkable women, years apart in ages and backgrounds, but whose talents have no division. Together, they reveal “there’s a star in all of us,” as they bring audiences to their feet through an inspiring journey of musical empowerment jam-packed with timeless hits of the past five decades. From Etta James to Pharrell, it’s a pop, rock, soul, and country hit parade, transporting audiences on a magical musical journey as these women compete to become the world’s next female singing superstar in a last-ditch effort devised by a music industry hopeful, desperate to save a legendary nightclub.

“I wanted to develop a hybrid ― a concert that morphed into a play with a thread of a storyline that empowers these girls in ways that allow the audience to relate to each of them,” says Previte, Academy Award and Golden Globe-winning composer of the Dirty Dancing smash hits, “(I’ve Had) The Time of My Life” and “Hungry Eyes.” We have a Broadway girl, a country girl, a gospel singer, and a young subway singer, and it’s just incredible to watch them seamlessly meld together into a group we call The Un4gettables. Each one is at the top of their own game, even this little subway singer. What blows me away, is the combination of their instant sisterhood and individual and collective power.

“I am so excited about the amazing singers you will all see and hear and the platinum songs they will deliver with such passion,” says D’Amico, who has produced a wide variety of concerts, theater, film, and recordings throughout the U.S. and the world. “It has been an honor working with Franke Previte, one of the nicest guys in the biz, our director, Michael LaFleur, and my other partner, Frank Dicopoulos, not to mention these four incredible women, as they find a wonderful common denominator, that together they are stronger, joyous and unforgettable! Be prepared for an uplifting experience.”