Home News Billy Gilman Added to Performance Lineup for the Concert for Love &... 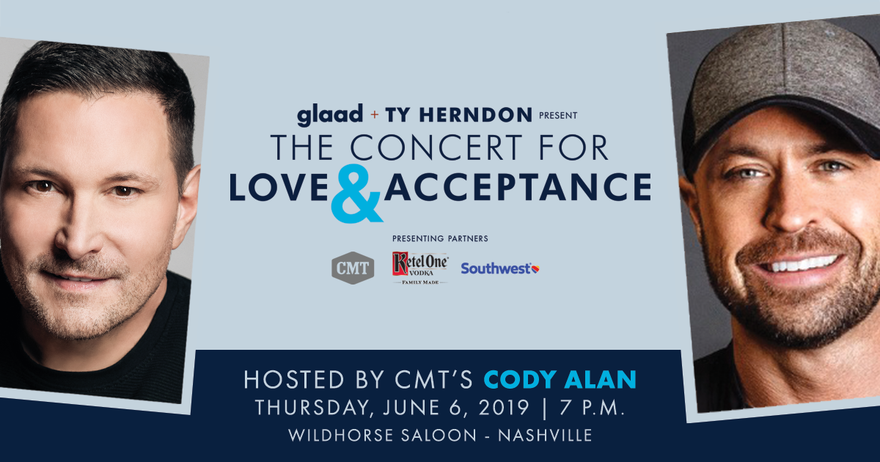 (NASHVILLE, TENN. –  May 28, 2019) – GLAAD announced today that Billy Gilman will be joining the list of performers for the 2019 Concert for Love & Acceptance in Nashville, Tennessee on Thursday, June 6. WWE Superstars Sonya Deville, Paige, and Mandy Rose will also attend the event for a special appearance at this year’s concert.

“Billy Gilman is one of America’s great musical treasures,” said Zeke Stokes, Chief Programs Officer at GLAAD and Executive Producer of the 2019 Concert for Love & Acceptance.  “He was already a record-breaking country star when he re-introduced himself to America on The Voice and captured the attention of a new generation of fans as an out and proud gay man. We are so excited to welcome him back to the Concert for Love & Acceptance stage.”

Gilman and the WWE Superstars join previously announced megastar Daughtry, who will be performing a special acoustic set at the Concert for Love & Acceptance, which features a coalition of artists and celebrities appearing and performing to accelerate acceptance for LGBTQ people. Singer Rita Wilson will also perform songs from her album, Halfway to Home. The 5th annual concert will take place during the legendary week Nashville goes Country (CMA Fest) and will be hosted by Grammy-nominated and Dove Award-winning artist Ty Herndon and CMT’s Cody Alan. Herndon, who co-founded the concert alongside GLAAD in 2015, will also perform. Other confirmed performers include Chely Wright, Harper Grae, Tayla Lynn, Brody Ray, Brandon Stansell, Antigone Rising, Lee Brice, Tyler Rich, and Mickey Guyton.

During last year’s Concert for Love & Acceptance, GLAAD announced the Ty Herndon Rising Stars Grant, bestowed upon young people for their commitment to enhancing LGBTQ inclusion and representation in music. The grant is eligible to LGBTQ young people who are working to accelerate acceptance in the music industry. Applications for the grant are now available at glaad.org/risingstars.

GLAAD Rising Stars Grant Program celebrates young people’s commitment to accelerating LGBTQ acceptance within their communities and culture at large. Grants are offered to support young people who are leveraging media to move hearts and minds and create change.

The 2019 Concert for Love and Acceptance partners include presenting partners CMT, Ketel One Family-Made Vodka, and Southwest, community partner The Weissmann Group, and media partner Billboard.

The event will take place at the Wildhorse Saloon in Nashville, Tennessee on Thursday, June 6 at 7:00pm. Click here for ticket information.