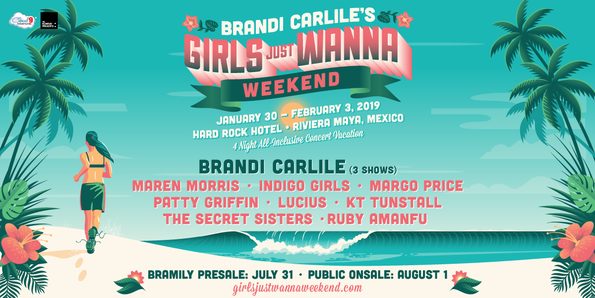 Of her inspiration behind the event, Carlile comments, “Mainstream festivals in the U.S. habitually exclude women as headline artists equal to men. I was brought up by Lilith Fair to believe that men and women enjoy live music equally and that women can not only headline a festival—they can BE a festival. I’m proud to announce that our festival has an ALL female-fronted lineup. I would absolutely LOVE to see a ton of men there supporting women in rock and roll, I want to see mothers with children, single people, LGBTQ brothers and sisters letting it all go for a weekend together in harmony (with bottomless tequila on hand to assist).”

Girls Just Wanna Weekend will be held at the Hard Rock Hotel Riviera Maya, a luxurious all-inclusive resort located between Playa del Carmen and Tulum. Guests can choose from a variety of well-appointed room categories available, including Concert Courtyard rooms, stage front suites and lush tropical views spread throughout the property. Members of the Bramily Fan Alliance—Carlile’s official fan club—will get access to opt-in to an exclusive pre-sale through the Bramily website until July 25, 2018. Those who register will be eligible for a pre-sale beginning Tuesday, July 31 with public on sale starting at 12:00 pm ET on Wednesday, August 1. Complete details regarding the festival and packages are available via www.girlsjustwannaweekend.com.

The festival caps off a triumphant year for Carlile following the release of her new album, By The Way, I Forgive You, which was recently named “Album of the Year” by Elton John on his Rocket Hour radio show on Beats 1 on Apple Music. Produced by Grammy-Award winning producer Dave Cobb and acclaimed musician Shooter Jennings, the album debuted at No. 1 on the Billboard Top Current Albums chart, Rock Albums chart and Americana/Folk Albums chart and No. 5 on the Billboard 200 chart—a career high for the Grammy-nominated singer, songwriter, and performer. Carlile is also nominated for three Americana Music Association Awards & Honors this year: Artist of the Year, Song of the Year (“The Joke”) and Album of the Year (By The Way, I Forgive You).

In continued celebration of the album, Carlile will return to “Late Night with Seth Meyers” this Thursday, July 19 for a performance featuring a special surprise guest. This follows performances earlier this year on “The Ellen DeGeneres Show,” “The Late Show with Stephen Colbert” and “Jimmy Kimmel Live!”

Carlile will continue her extensive nationwide tour this summer and fall with upcoming shows at Denver’s Red Rocks Amphitheatre (sold out), Los Angeles’ The Greek Theatre and Seattle’s Moore Theatre (sold out) among many others. In addition to the headline dates, Carlile will also make several festival appearances including Newport Folk Festival, Pilgrimage Music and Cultural Festival and Austin City Limits. See below for complete details.

Released on Low Country Sound/Elektra Records (purchase), By The Way, I Forgive You continues to receive overwhelming critical praise…

“…a raw, stunning demonstration of Carlile’s vocal prowess and offers an inspirational message of empowerment and resilience.”—American Songwriter

The 15 Best Albums of 2018 So Far—Entertainment Weekly

“On By the Way, I Forgive You, she aims higher than ever before, this time with her best songs and exquisite production on her side.”—Paste

August 9—Boulder, CO—FMQB Triple A Conference at the Fox Theatre

*co-headline with Jason Isbell and The 400 Unit