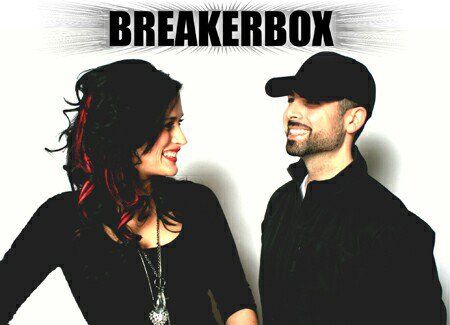 Lead singer/female guitarist, Christina DeNee´, and drummer, Scott Calandra, have been busy recording and performing and recently opened for Seether at the sold-out show “Thursday at The Harbor” where an estimated 10,000 people were in attendance.

In a recent press release, produce Chris Baseford said that “BREAKERBOX is a talented, hardworking band and being able to dive into the studio with Scott and Christina was an absolute pleasure. ‘Summertime’ is going to blow some minds.  We were able to create a heavy, aggressive yet melodic, hooky sound which a lot of people are going to dig!  Can’t wait to finish the rest of the new songs in the works.”

We asked Christina what inspired BREAKERBOX to write “Summertime” and she said “that ‘Summertime’ is a bit of a departure from our debut album ‘These Are Strange Days’ – which is a bit darker in overtones and sonically – that’s where we were at the time. But with ‘Summertime’ we wanted to capture the fun of being young and in love in the summertime. Uptempo…driving guitars, rock drumming…capture the same mood that Bryan Adams “SUMMER of ‘69” does. I had a lyrical concept and ran with it from a girl’s perspective… talking to the boy you like on the phone, having him pick you up on a summer night, beep the horn, you run outside and hop in the car and drive around together, feeling like there is no one else in the world! Real ‘driving around with the top down’ type stuff.” 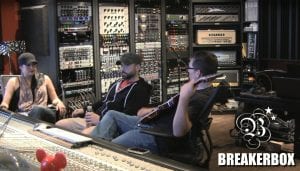 Christina and Scott (who also co-produces the single) chose to work with Chris Baseford because they are big fans and because of his work with Rob Zombie and John 5, as well as his work with PublicRecord.com where he was working with Tommy Lee on his Methods of Mayhem album at Atrium Studios.  “We met with him when we were in LA…a 30 minute lunch meeting turned into 4 hours and we knew this was a perfect match. Before we knew it, we were at Atrium Studios in the same rooms we saw on Chris’ PublicRecord episodes,” said Christina.

28On recording at Tommy Lee’s Atrium Studio, Christina was impressed with the entire experience.  “Not only is the Atrium just an incredible studio with the best gear possible, it’s actually in Tommy Lee’s home! So, the entire experience is just overwhelmingly inspiring…from Motley Crue’s Platinum and Gold Albums surrounding you, to the Koi Fish pond, the Movie Theater, and the endless drums to choose from.  If we had to narrow it down to just one memorable experience, I would say it was when we were doing pre-production on our song, and upstairs Tommy Lee & DJ Aero were rehearsing for their tour. Also, to see Scott playing Tommy Lee’s kit in the same room where we’d seen so many greats playing that same kit…to be honest, it was all pretty surreal.”

Will there be more songs to follow “Summertime”?  BREAKERBOX says absolutely yes and is currently working with Chris Baseford on a new tune.  They have more music that will be out in the Fall, but for now, that’s top secret!