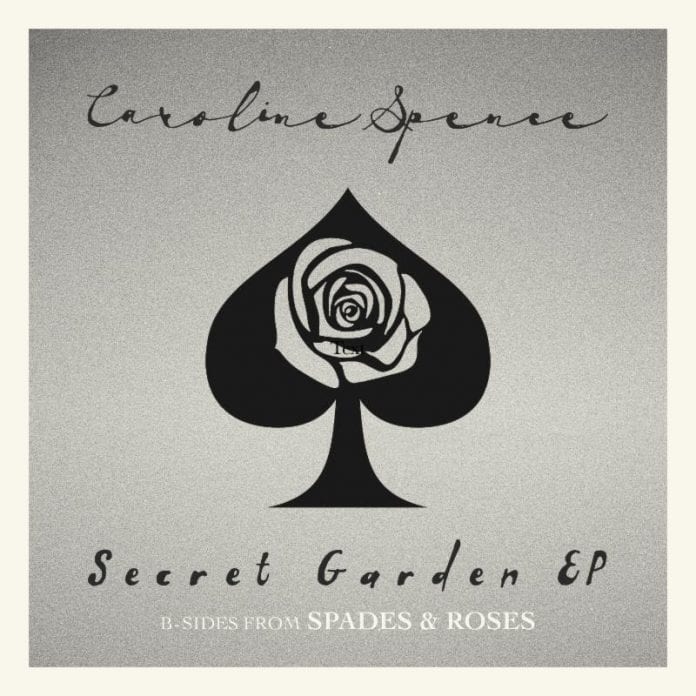 Nashville, TN — Aug. 24, 2017 — Caroline Spence follows up her critically-acclaimed sophomore album with Secret Garden EP (B-Sides from Spades & Roses), a new 5-song collection of alternative versions and album could-have-beens. Having won numerous songwriting awards from industry mainstays and garnered nods and admiration from both Miranda Lambert and her fellow writers in the Nashville underground, Spence delivered a record to meet the expectation. NPR dubbed Caroline Spence “one to follow” and American Songwriter Magazine called Spades & Roses “an album of stunning beauty and lasting impact.” Since the album’s release, Caroline has spent months on the road, some of it touring solo while opening for John Moreland, Tyler Childers, and Peter Bradley Adams. It was in those stripped-down sets that Spence was reminded that her songs have a life of their own, with or without full production.

On the new EP, out October 13th, Caroline showcases a few tunes from Spades & Roses in a new light. To help with these new versions, Spence enlisted the help of Dan Knobler and the two co-produced the collection, with Knobler chiming in on various supporting instruments. On the new version of “All The Beds I’ve Made,” recorded in the open tuning in which the song was originally written, the power of Spence’s voice and guitar cut right to the heart of the song. On “Wishing Well,” Spence chose to recreate the slow, quiet performance of the original demo of this song, which was whispered into her phone late at night in her childhood bedroom, as to not to wake her sleeping relatives while home for the holidays. The EP’s version of the album rocker “You Don’t Look So Good (Cocaine)” leans more towards the lonesome as the poignant lyrics soar over the acoustic guitar, made all the more powerful in it’s singularity. On the B-side version of “Slow Dancer,” the acoustic guitar drives the waltzing rhythm but the story takes the lead.

Rounding out this collection of B-sides is a cover of Bruce Springsteen’s “Secret Garden,” which was almost cut for the original record. Spence comments, “When we were selecting the songs for Spades & Roses, I had just fallen deeply in love with this song because I thought that a woman would have write it about herself. I felt that the woman who “Secret Garden” is also the kind of woman who could have written the songs on Spades & Roses. I wanted to cover this on the record but my producer (Neilson Hubbard) thought I had songs of my own that needed to be heard first. When I was thinking about doing this EP, I knew that this was the chance to tie this song into the collection.”

Secret Garden EP (B-Sides from Spades & Roses), is not a re-do of the original album but rather serves to show the true depth of Caroline Spence’s writing. Whether backed by a full studio band or performed singularly, Spence’s songs stand strong and the new EP showcases her boundless potential as a writer and singer.