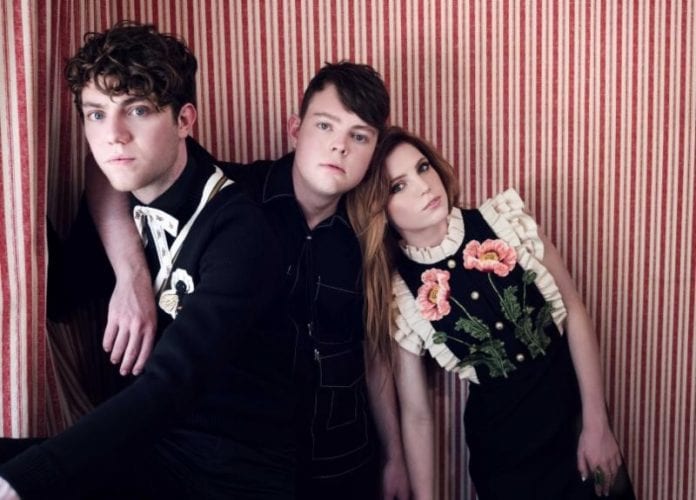 July 10, 2017 (Burbank, CA) – Echosmith returns with their highly-anticipated sophomore album, Inside A Dream, out September 29 via Warner Bros. Records. The 11-song set marks the long-awaited follow-up to their 2013 Gold-certified debut Talking Dreams, which spawned the triple-platinum breakout hit “Cool Kids.” A new track, “Goodbye,” will be released this Friday, July 14, alongside the official music video.

Following the album release, the band will embark on a 6-week North American tour, kicking off October 5 in Kansas City, MO. The artist presale – with a limited number of tickets and VIP packages – will start on Tuesday, July 11 at 10:00 a.m. local time, while the general on-sale will begin July 14 at 10:00 a.m. local time. To access the presale, fans will need to sign up for Echosmith’s mailing list at echosmith.com. See below for more information.

Inside A Dream marks a new and exciting direction for the LA-based alt-pop trio, showcasing a more mature and evolved sound. Led by charismatic frontwoman Sydney Sierota and rounded out by her brothers Noah (bass) and Graham (drums), the tight-knit siblings had to come to grips with the departure of big brother and guitar player Jamie, who chose to leave the band after the last album in order to spend more time with his wife and son. “We had to find ourselves as a trio instead of a quartet,” admits Noah. “At that point, we never had another musician on stage with us,” explains Sydney. “That literally forced us on a journey of having to discover this sound. We still had electric guitars, but they weren’t the center of the music anymore.” In order to bring that vision to life, the group utilized vintage synths, keys, and drum machines. As a result, Inside A Dream is awash in shimmering synths, airy guitars, and heavenly vocals that wouldn’t be out of place blasting from an eighties transistor radio during an episode Stranger Things.

Echosmith first emerged onto the scene in 2013, with the success of their debut album Talking Dreams and triple-platinum hit “Cool Kids,” and platinum-certified “Bright” propelling them into the spotlight. They quickly earned rave reviews from the likes of ELLE, Rolling Stone, Teen Vogue, Billboard, NYLON, and more for their distinctive melody-minded, New Wave-influenced sound, and have performed on ELLEN, The Tonight Show Starring Jimmy Fallon, The Today Show, Late Night with Seth Meyers, The Late Late Show with James Corden, Conan and more. The Sierotas – Sydney (vocals/keyboard), Noah (vocals/bass), and Graham (drums) – have played to crowds of thousands at festivals and with sold-out shows in the U.S. and Europe, and even joined Taylor Swift as special guests on her 1989 Tour in Philadelphia to perform “Cool Kids.”