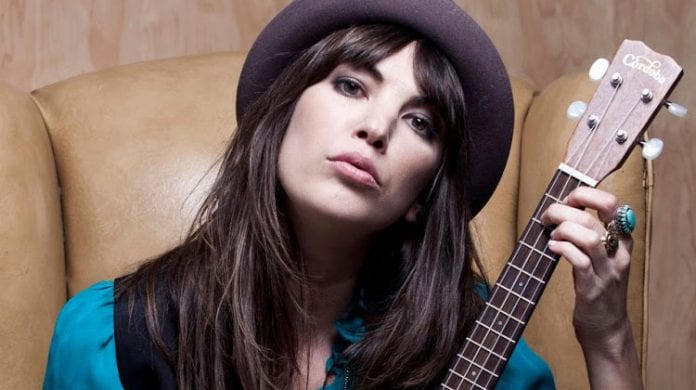 Female guitar player, singer/songwriter Deborah De Corral from Argentina has been nominated for “Best New Artist” for her album “Never or Eternity” at the XIII Annual Latin Awards which will be held tonight, November 15, at the Mandalay Bay Events Center in Las Vegas.  Spanish-language US TV network Univision will be showing the Latin Grammys live starting at 8pm Eastern time.

“Never or Eternity,” which Deborah describes as a light pop production, is her first album and consists of 10 songs co-authored by herself and several of her colleagues including Juan Campodonico, Gonzalo Aloras, Luciano Supervielle, Koko Stambuk, Lucas Marti, and others.  The album was produced by Juan Campodonico and Cristian Heyne in several different locations including Montevido, Buenos Aires, Chile and Miami.

Deborah is a native of Argentina and has been a model and TV host, but her love of music took over when she was invited to join the Australian group INXS as a guest on their 2010 tour which took her to the Winter Olympics in Vancouver and to Australia, and then again in 2011 throughout Argentina.  The multi-talented musician not only plays guitar, but also enjoys playing the keyboards and ukulele.

Her first hit single “Something” from her new album “Never or Eternity” was co-written by Robert Musso, a Uruguayan singer from the band The Bear Quartet, and remained in the top 5 on the major radio stations in Argentina and Chile for several consecutive weeks.

Since that time, Deborah has opened for Lenny Kravitz, Katy Perry, Maroon 5 and Beto Cuevas.  She has also been working with Beto Cuevas on a duet titled “Touch Down” on his new album “Transformation.”

You can find out more about the Latin Grammys by visiting www.latingrammy.com.

As for Deborah De Corral, please see the sites listed below.