Exciting news!!  It was announced today in a press release that the metal guitarist Lzzy Hale has joined the Epiphone Signature Artist family with her own classic signature Explorer guitar.  Read the release below:

For over two decades as the founder and leader of Halestorm, LZZY HALE has been called one of the greatest metal guitarists of her generation. And for her debut Signature model, LZZY worked closely with Epiphone’s luthiers in Nashville to design an Explorer to match her fiery fretwork.

“I always feel like a rock star with my Epiphone,” says LZZY. “I hope anyone who picks it up feels like a rock star, too. I would encourage them to make a lot of noise with it because that’s currently what I’m doing!” 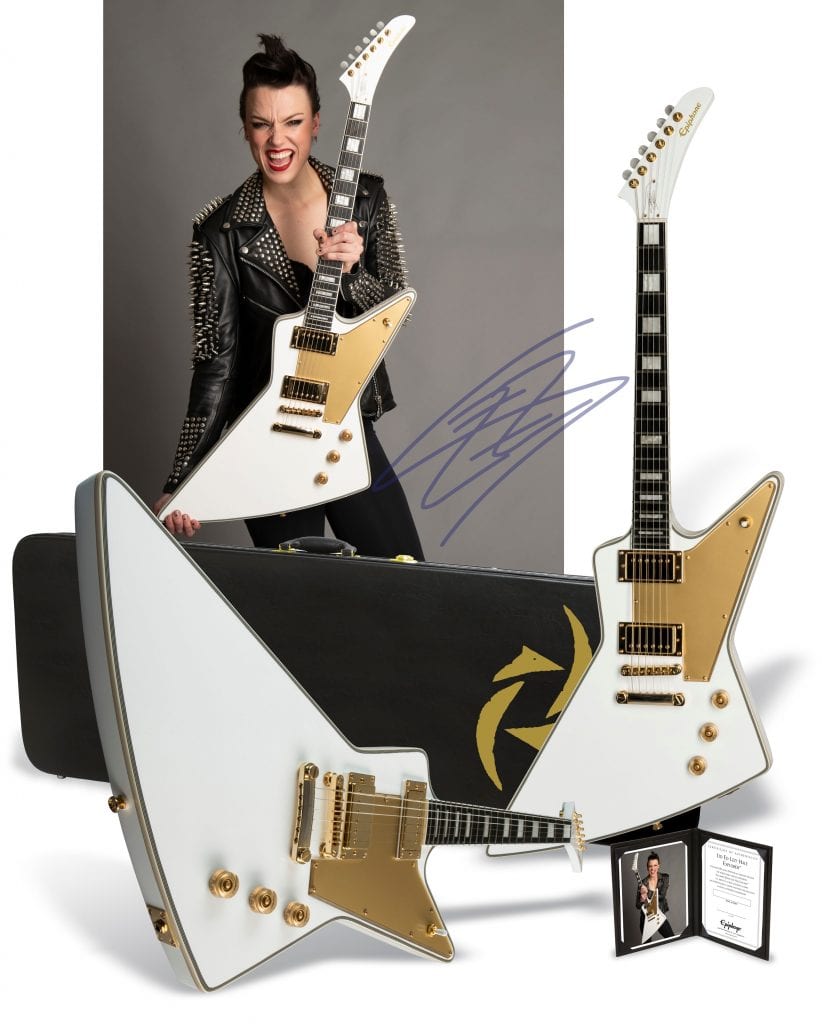 The Ltd. Ed. Lzzy Hale Signature Explorer Outfit has a Mahogany body with an Alpine White gloss finish with multi-layer black and white binding and a gold metallic pickguard. The Mahogany neck has a Custom “C” profile made to LZZY’s specifications, an Ebony fingerboard with block inlays, medium jumbo frets, a GraphTechTM nut and a traditional Explorer headstock with a vintage Epiphone logo in gold. LZZY’s Explorer is powered by Epiphone Alnico Classic PRO™ Humbuckers that have the tonal characteristics of classic 1950s humbuckers, but instead use Alnico V magnets with a slightly higher output for a more modern sound.

Below is a partial Q&A with LZZY HALE of Halestorm. For the full LZZY HALE Q&A with Epiphone, go HERE and visit: www.epiphone.com.

You’re always in a whirlwind of activity. What’s that like for you? What is your musical life like right now?

It’s interesting, when you get into music it’s an unexplainable thing. You can’t put your finger on why it’s happening. I’ve been talking a lot about how music chooses you because you can pinpoint when you had the epiphany that: ‘Wow, I really want to do this.’ But there’s no real rhyme or reason about choosing to be in this industry. It’s one of those things where there is no real guarantee, there is no real rule-book to follow. You have to thrive in the chaos and be good at that in order to keep it moving. When you start out, it’s this magical thing where you’re trying to figure out how to do this. How do I get up on stage in front of 60,000 people? Will that ever happen? So, you take everything in these baby steps. I guess I’ve tried to narrow it down to three different levels of where I’ve been at in my life.

Fans expect their favorite artists to be on-call 24/7. There’s a demand for artists to have new music on a regular basis, sometimes even monthly or weekly. How does this new reality of the music business sit with you? Do you feel pressure to always be active?

I feel a little of that now, but only in the past few years have I really been feeling that tug. We’ve been asking those kinds of questions ourselves… Do we put out a 12-song record or put out 7 songs? EP now and EP later? How do we do this? For us, what we’re doing right now is chasing what gets us excited. At the moment, we’ve had a little bit of time off which is a bit nerve wracking. I don’t know how to do nothing. My routine lately has been, I wake up with my cup of coffee, I have a songwriting station with my guitar…and right now it’s my Lzzy Hale Explorer because that’s my new toy! And I have my piano. I start on something in the morning and when I get stuck, I do laundry (laughs) or some menial task and I keep that idea running in my head. I’ve been writing a lot of songs in the past month. I write because I like to do it and I write because it’s enjoyable. I’ve always been much better at putting my feelings out on paper through songs. It’s one of those things where your passion is also your affliction (laughs) and you kind of need to do it every day. For right now, we’re writing because we love it. We’ll see it what happens. But it’s also my way of being prepared just in case someone says: ‘Hey, you know what would be a really good idea?’ and I can say ‘I have just the thing for that!’

Are there artists that are heroes to you for the way they have handled their lives as touring musicians?

Absolutely, I always have gone back to go forward. I’ve been fortunate to meet a lot of my idols. I talk to Tom Keifer from Cinderella quite a bit, he lives here in Nashville and we became friends a couple of years ago. It’s so crazy to have a friendship with someone that you grew up listening to. I was born in 1983 and technically I was a teenager in the 90s, but my A,B,C,D’s were and still are: Alice Cooper, Black Sabbath, Cinderella and Dio. That’s the basis for everything that I do. You can pepper in other things, but it all comes back to those. One thing in common that I find with Tom and artists like Tony Iommi or Slash—all the legends and everyone I’ve admired and talked to–is they literally spend their every waking moment not wasting time and practicing every day. But they don’t call it practice.  They say, ‘you just make noise until you like the noise you make. Don’t call it practice.  If you call it practice, then it’s work.’ So, whenever I start getting stuck for ideas, I love talking to those guys, or at least looking back on what they’ve said to me. As far as career-wise, I also got to talk to Pat Benatar, just for a female perspective. She was one of those people who said look, there’s going to be a time when you have to reach outside of yourself. It’s not always going to be exciting and you’re going to have to reach for that passion. And that’s ok. Everybody goes through that. It’s not over (laughs)! You’re just trying to figure out how to piece the puzzle together. It’s comforting to hear those things from your idols.

How do you stay inspired, musically?

One thing I’ve been doing with the band is I try to learn one new thing every day—no matter how small. And then that night incorporate it into the show. We have these sections in our live set where we kind of go off the rails a little bit and we don’t really know how we’re going to end. It’s kind of jazz (laughs). You have to listen to each other. Even when I was 13 when we started the band, I was always impatient. I wanted to get out there, I wanted to play live.  I’ve been trying to harness that again. That pressure kind of helps. Those little rewards of learning something and applying it and seeing how it improves your work.

Since you first came by Epiphone to see your new Signature Explorer, the guitar has never left your hands. Now that it’s had some stage-time, how is it holding up?

Dude, it’s amazing. This guitar was something I’ve been wanting to do for a long time. In passing, they’d say, ‘We should do an Epiphone…’and I’d say ‘yeah…yeah… that would be great.’  And now here it is! Having an Epiphone signature is extremely important to me because it gives me a broad reach. I’ve had signature models before, but they’ve also been pretty much a mortgage payment. Even from a financial aspect, with my Epiphone, I get to give the gift of music and put a great guitar in the hands of people who want it. It could be someone’s first guitar, but it’s not something you’ll ever have to upgrade. This a real guitar and it feels like home to me. What I love about an Explorer is when you see someone playing one, you know they’re going to rock. It has those edges to it. I always feel like a rock star with my Epiphone. I hope anyone who picks it up feels like a rock star, too. I would encourage them to make a lot of noise with it because that’s currently what I’m doing (laughs)! 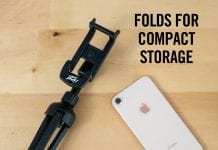 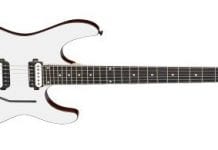 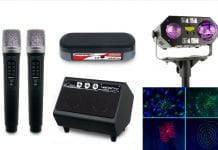