Nashville, TN – October 23, 2018 – Gibson Brands, Inc., the world’s most iconic guitar brand, today announced the appointment of James “JC” Curleigh as president and chief executive officer. Curleigh joins Gibson from Levi Strauss & Co., where he served as president of the Levi’s brand, and was a member of its worldwide leadership team. Gibson also announced the appointments of Cesar Gueikian as CMO (chief merchant officer); Kim Mattoon as CFO (chief financial officer); and Christian Schmitz as CPO (chief production officer). The appointments of Curleigh and the new Gibson senior team are effective November 1, 2018.

Curleigh will lead a new Gibson senior team of proven global professionals with broad experience across brand building, product quality and innovation, and business development to establish operational excellence and build a strong team dynamic across the enterprise. They will collectively focus on setting the conditions for success for Gibson Brands to continue to create high quality instruments, develop meaningful partnerships and deliver profitable growth across the core business of guitars and beyond.

“As a musician, I have always treasured my Gibson guitars and I have the utmost respect for the iconic Gibson brand and those who choose to play Gibson guitars,” said Curleigh. “Gibson has been a pioneer of craftsmanship and innovation in musical instruments and has been synonymous with shaping the sounds of generations and genres for more than 100 years. I am very honored to play a leading role with this iconic brand.”

Curleigh continued: “As a business leader and a brand builder, this is the beginning of a new era for Gibson that will build on its proven heritage and iconic status. We are focusing on the future and off to a fresh start, with a strong financial foundation, a committed and experienced new leadership team and new ownership that is equally passionate about the brand. As the industry leader, we have an opportunity and an obligation to set the best conditions for success for our brands, our fans, our partners and our own extended team. I look forward to leading Gibson confidently into the future.”

Nat Zilkha, incoming Chairman of Gibson’s Board of Directors and representing the new majority ownership group (KKR), said, “JC’s track record speaks for itself – he’s a rock star when it comes to understanding consumers and shaping a marketplace, working with retail partners and building world class brands. JC, Cesar, Kim and Christian bring new energy and vision to Gibson, fueled by authentic passion for the company and music. On behalf of Gibson’s Board of Directors, I look forward to partnering with them to help Gibson achieve its strategic vision and forge a successful, bright future for the Company and all of its stakeholders.”

A life-long guitarist and avid Gibson collector, Gueikian joins the Company as the new chief merchant officer (CMO) after a 20-year career as an entrepreneur and financier, investing in the growth of companies around the world. He has led teams at global investment houses culminating with the founding and successful growth of his own firm. In his role, Gueikian will focus on product and its evolution, commercial solutions and connecting fans through marketing strategies to drive profitable growth.

“Joining Gibson is the opportunity of a lifetime for me,” said Gueikian. “As a business person, a musician and lifelong fan of the craftsmanship and quality of Gibson guitars, I am thrilled to help shape the future of a company whose instruments have influenced my life and the sound of music globally. I am committed to collaborating closely with all of Gibson’s stakeholders, including our artists, dealers, our employees and our customers to expand on Gibson’s leadership. I share their passion for Gibson’s iconic instruments and I am confident that together we will create a successful future that is worthy of the company’s incredible heritage.”

As CFO, Mattoon will support Gibson by ensuring the company builds and maintains the financial, human and other resources necessary to sustain a growth trajectory and invest in the future. She joins Gibson from Richemont North America where she served as chief operating officer, and brings deep financial acumen, proven brand-building experience and an enterprise-wide understanding of strategy and execution to Gibson.

“I’m incredibly excited to join Gibson and to be part of a company with such an iconic legacy and promising future,” said Mattoon. “With our strong financial position and clean balance sheet, we have an opportunity to build on and expand Gibson’s core guitar business as the company moves into this next chapter. I look forward to working with JC, Cesar, Christian and the entire Gibson team to drive long-term growth at Gibson and ensure that the Company continues to represent the pinnacle of the music industry.”

As chief production officer, Christian Schmitz will take on the challenge of driving best practices in manufacturing, creating supply chain synergy and establishing operational excellence across Gibson’s U.S. and global production platform. Schmitz has been a key member of the transition team at Gibson over the past year and his operational leadership, experience and focus on collaboration and teamwork will immediately benefit the Company.

“Having worked with the Gibson team for the past year, I am confident we can continue to turn our production focus into a competitive advantage for Gibson,” says Schmitz.

Gibson will emerge from bankruptcy protection on November 1, 2018. Upon emergence, KKR will be the majority owner with the controlling interest of the Company. KKR is a leading global investment firm that has an extensive track record of successful investments in the retail and consumer industries, helping its portfolio companies achieve sustainable long-term growth. 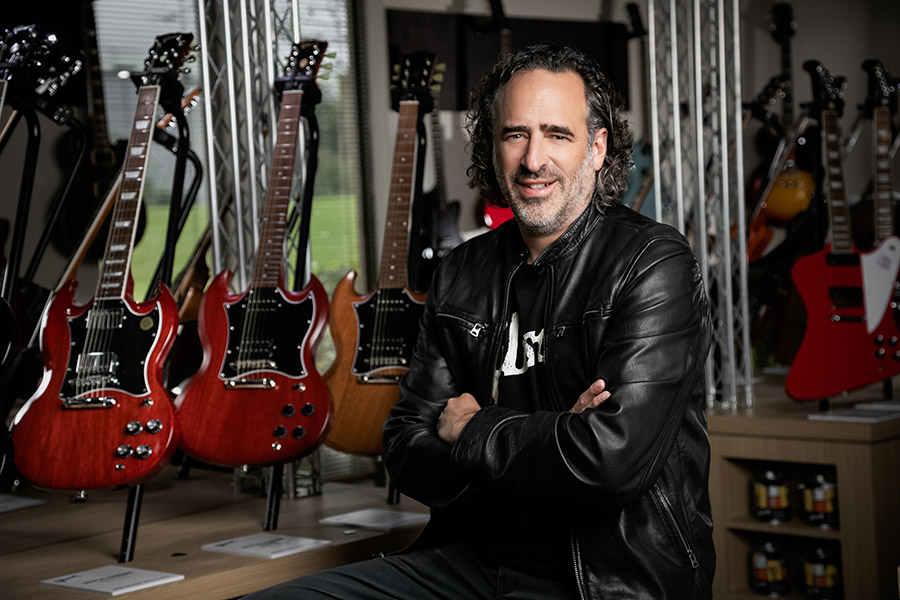 James “JC” Curleigh joins Gibson as president and chief executive officer, where he will lead a new Gibson senior team of proven executives with broad experience in global brand building, finance and product development. JC is a guitar enthusiast and has been a proud owner of both Gibson and Epiphone guitars over the years, including his latest addition – a Gibson 1960’s J-45 acoustic guitar.

Most recently JC served as the president of the Levi’s brand at Levi Strauss & Co., where he guided strategic shifts, leadership team evolution and market execution for all brands within the Levi Strauss & Co. portfolio, including Levi’s, Dockers, Signature by Levi’s Strauss and DENIZEN by Levi’s. At Levi’s he returned the brand to its iconic status and grew the business profitably every year under his leadership. He has a proven track record from Levi’s of finding ways to leverage heritage and create modern solutions. JC (along with his team) is credited with being the driving force behind the Levi’s resurgence.

Over the years, JC has built a reputation as a brand building expert and has crafted uniquely tailored solutions for a variety of other well-known consumer goods companies, including as president and CEO of KEEN Footwear and of Salomon Sports NA. At KEEN, he steered a young company to years of strong growth and developed a unique brand identity for its future. Additionally, under his leadership at Salomon, he expanded the ski company into a leading innovative action sports brand.

JC holds a bachelor’s degree in commerce from St. Mary’s University in Halifax, Nova Scotia, and has furthered his executive education at both Stanford and Harvard. He also has delivered several keynote speeches around the world on progressive brand building, business solutions, and team dynamics. He is a triple citizen of the U.S.A., Canada and the U.K. and is a member of the Board of Trustees for the Waterkeeper Alliance. He loves to play music, surf, ski and travel extensively with his wife and three kids. 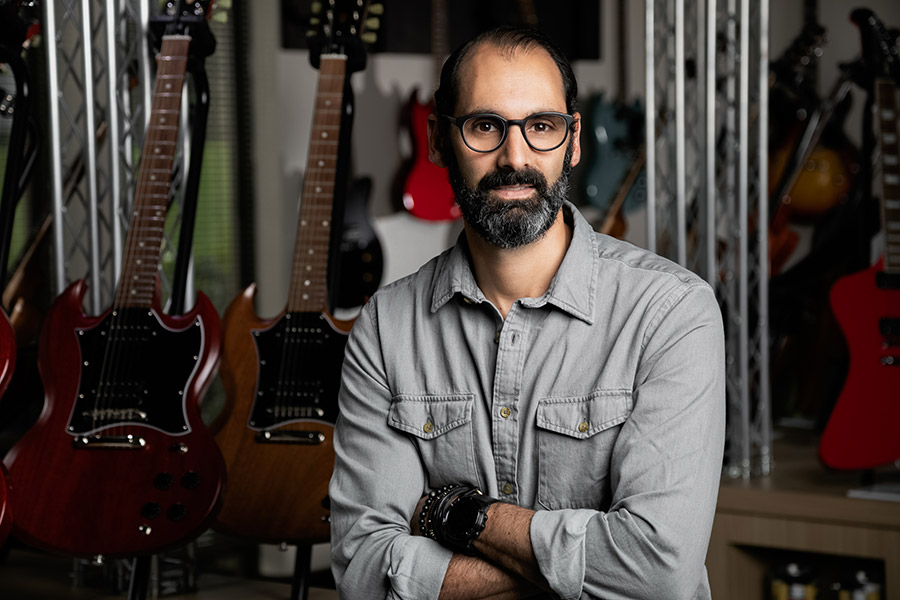 Cesar Gueikian joins Gibson as chief merchant officer (CMO) overseeing product and its evolution, commercial solutions and marketing strategies. His new role with Gibson melds his nearly 20 years of experience as an entrepreneur and financier, investing in companies around the world, with his life-long passion for guitars and music.

Prior to joining Gibson, Cesar founded Melody Capital Partners, an alternative asset manager focused on private corporate financing and investing. Under his leadership, Melody grew from a seed investment of $100 million to more than $1.5 billion in assets under management.

Prior to founding Melody Capital, Cesar served as founder and global head of the Special Situations Group (“SSG”) at UBS, as well as head of the firm’s Leveraged Finance Capital Markets (“LCM”) team for Europe, the Middle East and Africa. He has also headed Illiquid Credit Trading for North America at Merrill Lynch and he began his career at Deutsche Bank in London and New York.

Cesar earned a B.A. in Business from Universidad de San Andres, Buenos Aires, Argentina and an M.B.A. from The University of Chicago. An accomplished musician, guitarist and song-writer, Cesar picked up his first guitar at the age of 10 and performs an eclectic range of music genres, from Spanish to rock to heavy metal. Over the last 25 years he has performed and recorded with several heavy metal and rock bands and is an avid collector of vintage guitars, with a collection that includes over 30 Gibson guitars. Cesar also competed professionally on the international tennis tour, is a surfing enthusiast and self-described extreme sports junkie. 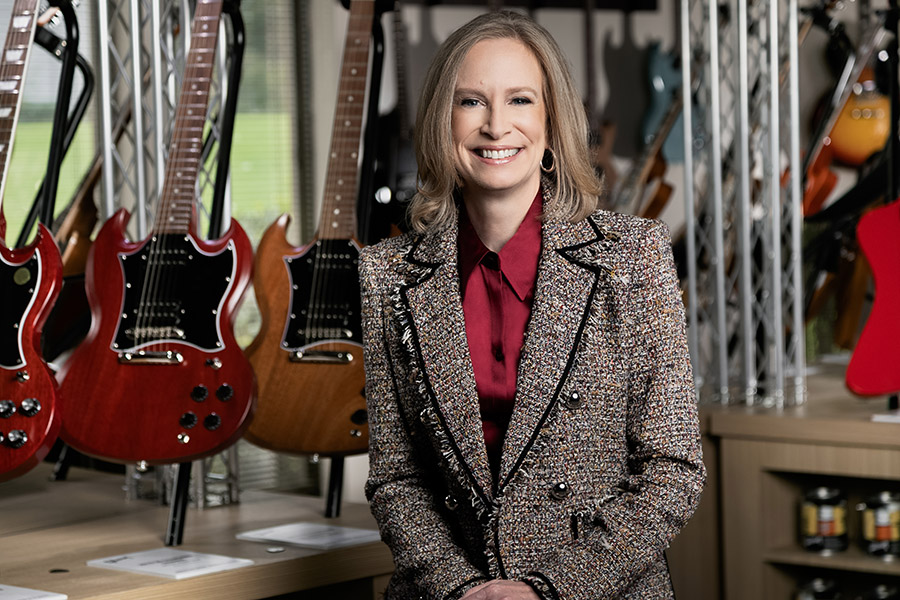 At Richemont North America, Kim led the day-to-day commercial services and operating activities that supported the achievement of the region’s strategic and financial goals. Under her guidance, Richemont established and enhanced the controls, administrative and reporting procedures, and people systems to effectively support and grow its business.

Prior to Richemont, Kim served as CFO at IWC Schaffhausen and Peter Millar – both Richemont portfolio companies – and as Vice President – Finance, Real Estate, and IT at The Body Shop. She began her career and spent 10 years at PricewaterhouseCoopers. During her time at IWC Schaffhausen, she worked from their headquarters in Switzerland, giving her unique international perspective and the opportunity to interact with a variety of consumer groups. Kim brings her strong financial acumen, ability to build global brands and deep understanding of enterprise-wide strategy execution to her role as CFO at Gibson.

Prior to Gibson, Christian was a director at KKR Capstone. He has significant expertise leading the transformations of multiple businesses while serving as a partner at McKinsey & Company and has significant operational experience from his time as chief operating officer at German car service chain ATU. Christian holds a diploma in Business Administration from WHU Otto Beisheim Graduate School of Management.

Nathaniel M. Zilkha joined KKR in 2007 and serves as the Head of Alternative Credit, which includes the firm’s private credit, principal finance and special situations businesses. Mr. Zilkha is also a portfolio manager for KKR’s special situations funds and portfolios, which he has managed since their inception in 2009, and a member of KKR’s Investing & Distribution Committee, Private Credit Investment Committee, Special Situations Investment Committee and KKR Credit Portfolio Management Committee. Mr. Zilkha graduated cum laude from Princeton University. He is a lifelong guitar player and musician, having played lead guitar for the New York-based band Red Rooster in his earlier years. In his time with the Red Rooster, the band published three albums Walk (2009), Dose (2005) and Porch Songs (2002), and toured at various music festivals, including an appearance at the Newport Folk Festival in 2008.