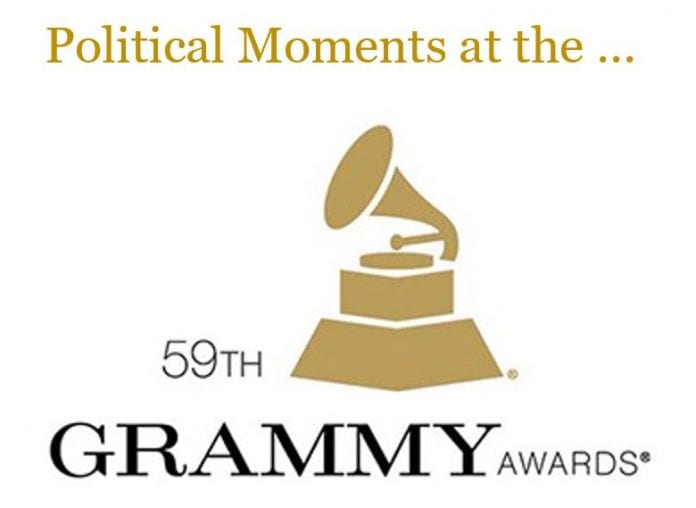 Musicians and actors have taken to the airwaves since the inauguration of President Donald Trump to voice their opinions on the current administration and their policies. Whether it be through videos, social media, or participating in protests, most are leading the charge on women’s rights, LGBTQ rights, diversity and inclusion, and protesting Trump’s Executive Order on immigration.

Most people tuning in to The Grammys fully expected to hear political views and were not disappointed – it’s expected! The evening started off fairly subdued with only a few political statements, but as the evening went on, musicians stood up and made their voices heard. 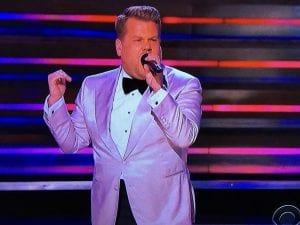 James Corden set the tone for the night with his opening rap containing a line “Live it all up, because this is the best – and with President Trump we don’t know what comes next” to which he received a great deal of applause. 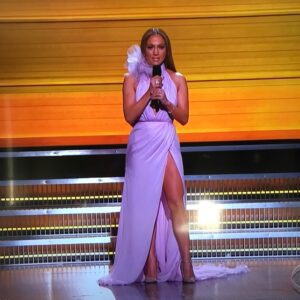 Jennifer Lopez was the first presenter up for the evening for the Best New Artist category and in her opening, she recalled attending her first Grammy awards show and even the dress she wore. She then went on to say “This night is not about dresses or even the awards. It is about the music, the words, and the voices. How they move us, inspire us, and touch all our lives. At this particular point in history, our voices are needed more than ever.”  She continued on with a quote from Author Toni Morrison of the moving essay, “No Place for Self-Pity, No Room for Fear.”  “As Toni Morrison once said, ‘This is precisely the time when artists go to work. There is no time for despair, no place for self-pity, no need for silence, [and] no room for fear. … We do language. That is how civilizations heal.'” 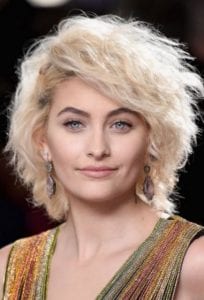 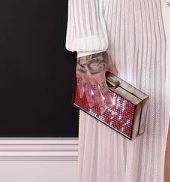 Paris Jackson took the stage to present Daft Punk and The Weeknd and appealed for protests to the South Dakota pipeline. Highly Suspect’s Johnny Stevens wore a jacket with the words “impeach” on the back. Skylar Grey carried a digital purse on the red carpet that alternated flashing words “empowerment” and “equality.” Grey stated on the red carpet that, “It’s my women’s march.” 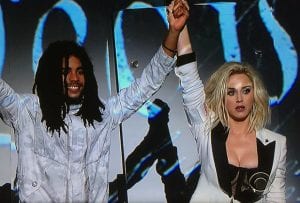 Katy Perry, donned in a Tom Ford (the designer who refused to dress Melania Trump) pantsuit, performed her new song “Chained To The Rhythm” while wearing an arm band with the word PERSIST in reference to the recent silencing of Elizabeth Warren by Mitch McConnell. The stage was set with a white house with a white picket fence. She was joined by Skip Marley, also donned in white, before the fence and the house came crashing down.

There were other subtle messages throughout evening, but the most politically charged came from A Tribe Called Quest, Busta Rhymes and Anderson .Paak. Rhymes chanted “Resist. Resist. Resist. Resist.” He continued to rap “I just wanna thank President Agent Orange for perpetuating all of the evil that you’ve been perpetuating throughout the United States – I wanna thank President Agent Orange for his unsuccessful attempt at the Muslim ban, but we came together. We the People.” During the performance, several of the musicians wore Black Panther uniforms, people broke through the backdrop wall, and numerous people of different ethnicities joined them on stage to show their unity. 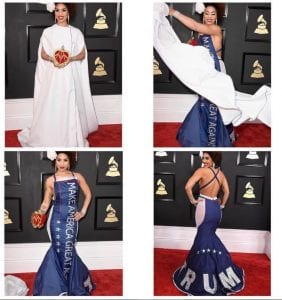 On the opposite end of the spectrum, singer Joy Villa graced the red carpet in a Andre Soriano blue halter mermaid gown with the slogan “Make America Great Again” in silver rhinestones down the side of the gown. TRUMP in silver rhinestones was also embedded on the trail of the gown.  “Sometimes you just gotta be free to express yourself,” Villa wrote of her Instagram account.  In another post, she said “Go big, or go home. You can either stand for what you believe or fall for what you don’t. Above all make a choice for tolerance and love. Agree to disagree. See the person over the politics, carry yourself with dignity, always. Life is made to be lived, so go boldly and give no effs!”

So, all in all, there was plenty of political banter to go around.