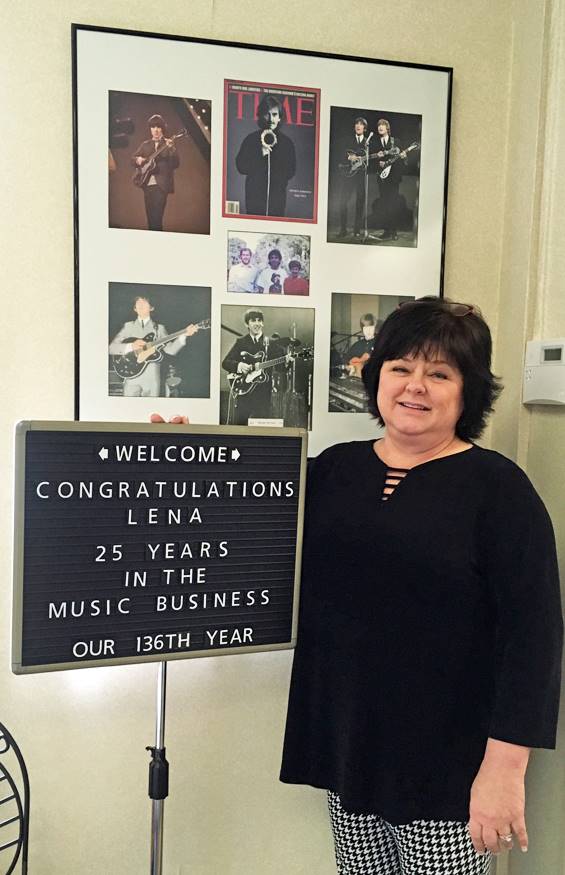 Savannah, GA — From its very inception, the Gretsch Company has been a family affair. It was founded in 1883 by Friedrich Gretsch and has been led by his descendants for four generations, culminating with current president Fred W. Gretsch. 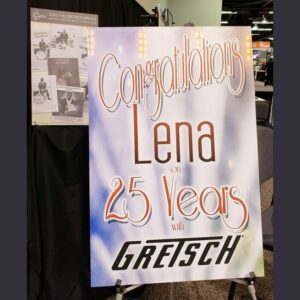 Throughout that storied history, several exceptional women have contributed significantly to the Gretsch legacy. That lineage started with Friedrich’s wife Rosa and includes the company’s current vice president and CFO, Dinah Gretsch.

And now, celebrating her 25th anniversary with the Gretsch Company is Lena Thomas. As the daughter of Fred and Dinah, Lena represents the 5th generation of Gretsch family leadership.

And in honor of Lena’s 25 years with Gretsch, things got rocking at the GretschGear Booth at the 2019 NAMM Show. Family, friends, musicians, and Gretsch artists gathered on January 26 to surprise Lena and celebrate her special anniversary.

Like many “Gretsch Kids,” Lena was involved in the family business at an early age. She began working part-time, after school, when she was thirteen. “I had her working in the office after school and helping me with all kinds of projects, including a big computer conversion,” shares Dinah Gretsch. “She was my data input person and a really good one.” Lena worked part-time at Gretsch through high school then entered Columbia College in South Carolina, where she earned a degree in business administration.

If you work for the Gretsch Company, you had better look good in a hat. That’s because you’re going to be wearing a lot of them. Since officially joining the company in 1994, Lena has worked in virtually all areas of the business: purchasing, inventory control, manufacturing costing, production scheduling, quality control, office administration, and more. She was an integral part of managing the Bigsby Vibrato business and even managed the Ridgeland, SC drum factory for two years.  Today, Lena also manages the cool GretschGear apparel and merchandise store. “Lena’s handled that 100% on her own,” says Dinah. “We can’t wait to see what it will be in five years.”

“I am blessed to have been a part of the Gretsch legacy for the last 25 years,” says Lena. “And I look forward to being an integral part in the future to ensure Gretsch continues for another 136 years.”

Having the next generation involved in the family business is a source of pride for Dinah and Fred, and a long-standing family tradition as well. “Fred and I are very proud of Lena and her 25 years of dedication and service to the Worldwide Gretsch Community,” says Dinah. “Plus, she’s a super daughter and a super mother as well.”