Home News GRITTY IN PINK GIVES AUDIENCE A LOOK INSIDE THEIR COMEBACK TO THE... 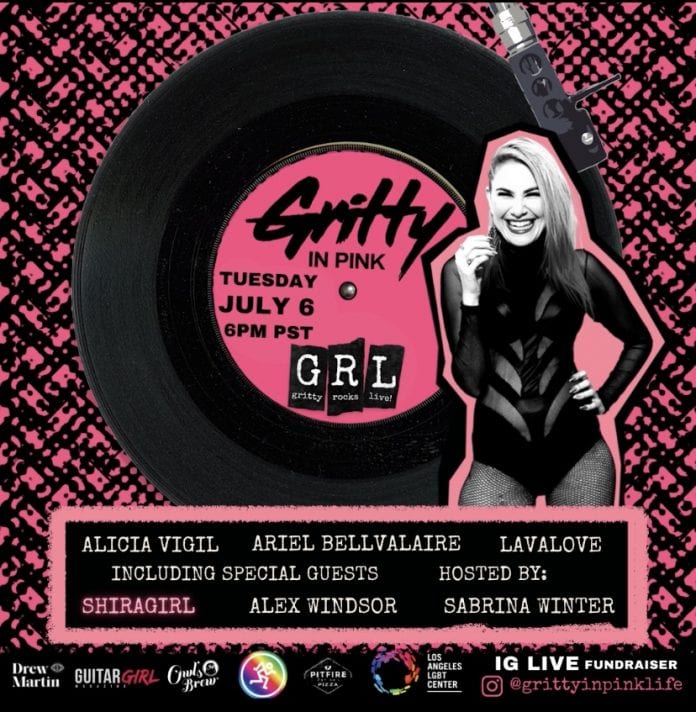 Shiragirl kicked off the show with a special Gritty rendition of Sublime’s “Summertime (Doin’ time)”. After the opening performance, the hosts switched gears and welcomed their first guest of the night, singer/songwriter and Gritty’s own VK Lynne (The Spider Accomplice). She shared her experience living in NoHo for almost 20 years, her new feature in NoHo Arts District and excitement for Gritty In Pink’s upcoming pop-up show which she will be attending. Then, goth hard-rock songstress Alicia Vigil (Vigil Of War/Dragonforce) joined the show to talk about what she did during quarantine to stay occupied and returning to touring in the future.

Ariel Bellvalaire joined and talked about her time in the band Paradise Kitty and their upcoming show at the Viper Room in September. She also shared details about her new solo music, she described it as “it’s pop-rock, people think it’s [music] about relationships, but it’s really about my experience [in the music industry].” Bellvalaire also gave the audience an acoustic version of her single “Diamonds Are Cold.” Lastly, LA indie band Lavalove closed the show with a performance of an unreleased song.

In case you missed the Gritty Rock’s Live surprise pre-show, it is now available to watch on Gritty In Pink’s IGTV. If you’re in the LA area, stop by Pitfire Pizza in NoHo,CA to see Gritty In Pink make their return to the live stage! Or tune in on Gritty In Pink’s Facebook to see them rock out Thursday, July 8 at 6PM PT/9PM ET with live music starting at 7PM PT/10 PM ET. Stay tuned for more special announcements via Gritty In Pink’s Instagram (@grittyinpinklife).