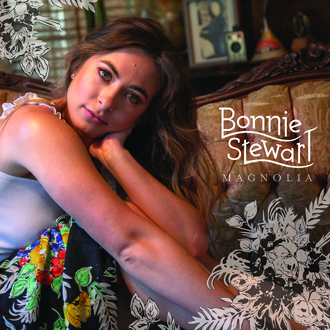 The soulful sound of Bonnie Stewart, a lyric-driven singer/songwriter whose music bridges the gap between Americana’s past and present, can be heard in the title track “Magnolia” from the forthcoming debut EP due out September 25. The title track “Magnolia,” serves as the ethereal songstress’ first taste of a collection of songs rooted in the influence of her parents’ timeless record collection — including Emmylou Harris, Guy Clark, and other classic craftsmen. The musical arrangements are fresh, lush, atmospheric nods to the modern-day.

Written by Stewart and produced by local producer/writer Oscar Charles (Carly Pearce, Charlie Worsham, Elvie Shane, etc.), Magnolia sets the tone for the kind of music that Stewart wants to be known for.

“This whole EP has been a labor of love and an exercise in patience. In the words of my mom, ‘Nothing done fast is ever done right.'” shares Stewart. “I wrote ‘Magnolia’ in the shower seven years ago in a particularly homesick moment, and I’m so grateful to the team that I work with that I was given the creative freedom to turn it into the sound I imagined all those years ago. It’s only fitting that this song heads the record off as a bridge from my past to everything to come.”

Born and raised in South Carolina, as a child, Stewart moved across the state, living in small towns and cities alike. Her environment was often transient, forcing Stewart to grow up fast, learning to be resilient, independent and steadfast. Fortunately, her love of music — from the iconic folksingers of her parents’ generation to the rock artists her older brothers preferred — remained constant and inspired this old soul to begin songwriting at just nine years old. Now signed to indie label Angels & Outlaws, under the wing of Nashville’s own Struggle Jennings, Stewart is ready to share her story with the world.