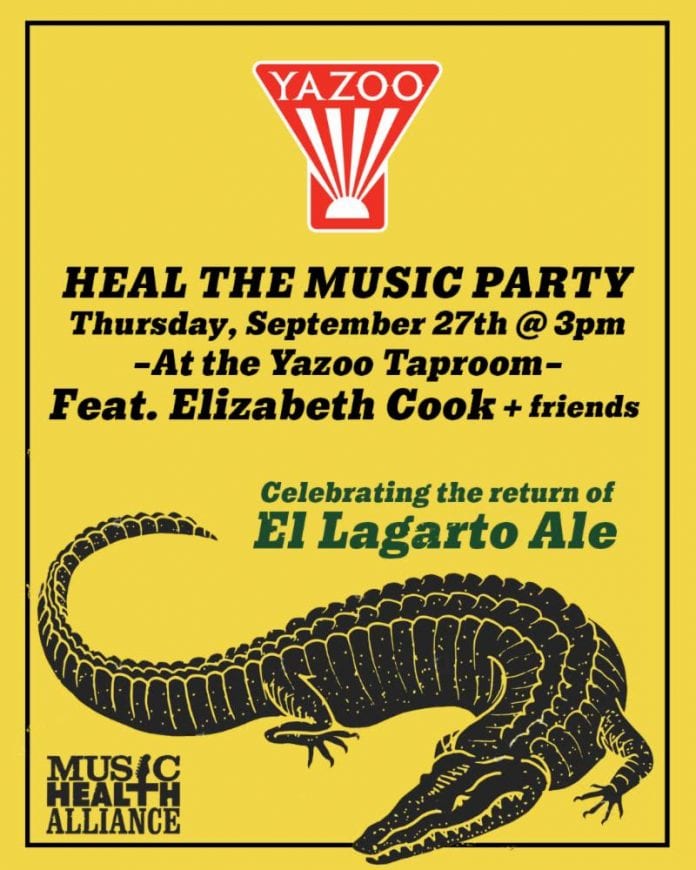 “El Lagarto” is an unfiltered wheat beer spiced with Everglades herbs, inspired by Elizabeth’s central Florida home. Linus Hall, Owner of Yazoo Brewing Company, speaks on the taste of the unique beer, “We’re really pleased, once again, on how El Lagarto turned out. It’s an easy-sipping light wheat beer, with hints of citrus and orange peel.” One-hundred percent of the revenues from the sale of the beer will be donated to the Ben Eyestone Fund at Music Health Alliance. “In addition to all the great local retailers that supported us and sold the beer last year, we’ve partnered up with Kroger to sell El Lagarto in about 30 Middle Tennessee stores. With that, we should be able to double the proceeds to The Ben Eyestone Fund at Music Health Alliance this year!”

In March 2018, with the help of generous contributions from Elizabeth Cook, Yazoo Brewing Company, Dierks Bentley, the Saint Thomas Foundation, the Eyestone family and numerous venues, musicians and friends, The Ben Eyestone Fund at Music Health Alliance was created in memory of the East Nashville musician who would have celebrated his 29th birthday in 2018. The drummer for alternative acts Margo Price, Nikki Lane and The Lonely H’s died on July 12, 2017; days after a delayed biopsy delivered a diagnosis of advanced colon cancer. Referred to as an “untimely death,” it was a tragic and preventable passing of a rising star due to a health care system that failed him. As industry advocates, helping music professionals across the country gain access to affordable health care is at the heart of Music Health Alliance’s mission. The launch of the Ben Eyestone Fund furthers that mission by removing barriers to life-saving diagnostics and treatment.

Tatum Hauck Allsep, the founder and CEO of Music Health Alliance, adds how much of a difference The Ben Eyestone Fund has already had on the lives of musicians in the short 5 months since its inception. “The Ben Eyestone Fund has enabled 8 clients to access diagnostic testing and the follow-up treatment that has literally saved their lives.” Elizabeth Cook remembers Eyestone’s legacy by adding, “It’s awesome and healing that we have the opportunity to not only remember Ben, a very important member of our musician community but that the money raised will without a single doubt help deter preventable losses like the one suffered when we lost Ben.”

Owner of Yazoo Brewing Company, Linus Hall, reiterates how important the Nashville music community was to his company’s success, “Yazoo’s story would have been a short one without Nashville musicians – the ones who supported us, bought our beer, wore our gear, gave us shout-outs while on stage, and even asked for our beer in their riders. A lot of people in the music industry in Nashville can’t afford health insurance. That’s where the Music Health Alliance comes in, and we’re grateful that the proceeds from this beer will go to help people in need.”

Tatum Hauck Allsep, the founder and CEO of Music Health Alliance, was excited to hear about the benefit beer. “No one should ever have to choose between food and medicine. Thanks to Elizabeth Cook, Yazoo Brewing Company and their continued commitment to Music Health Alliance, we are hopeful no one in the Nashville music community will ever have to make that choice again.” Elizabeth Cook added, “This is very important to me personally, as well as to so many of the folks that I work with that are my family.”

“El Lagarto” is being kegged and bottled fresh this week and will be hitting the market immediately after. The launch party will be held at Yazoo’s Taproom (910 Division St) on Thursday, September 27th at 3 pm (1:30 pm for press + VIP). Americana artist, Wade Sapp, will be frying some gator tail, so come hungry! Joining Elizabeth for a small acoustic set is country goddess and step-granddaughter of Johnny Cash Carlene Carter, Americana troubadour Aaron Lee Tasjan, and Sapp. For more information, visit https://yazoobrew.com/taproom/.