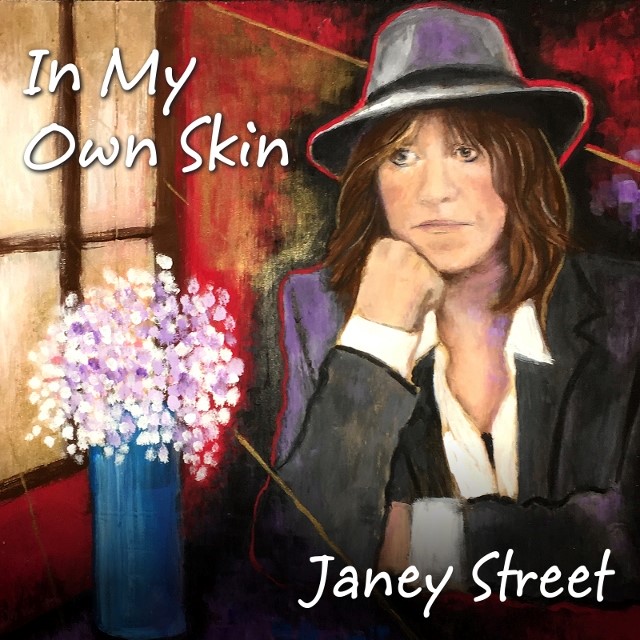 SINGER-SONGWRITER JANEY STREET
Early Clive Davis Protégée Sets Her Musical Sights Beyond the Horizon,
Steps Out of the Norm and Deeper Into Herself
On New Album
IN MY OWN SKIN
Out June 23rd via Blue Élan Records

(Los Angeles, CA)— April 6, 2017 – Blue Élan Records is thrilled to announce the new album from Nashville-based singer-songwriter, JANEY STREET. The album, In My Own Skin, continues the meteoric comeback for STREET and will be released on June 23, 2017, nearly one year to the day after the release of her award-winning debut, My Side of Paradise. “When Blue Elan signed me, they didn’t know if I could still sing or if I was a heroin addict!” Lucky for us all, STREET is healthy, writes great songs and can still sing her ass off!

With her new work, STREET aims to refine and direct the musical energy she poured into the first album. “After writing for other young artists, film and TV and mentoring new writers, my first Blue Elan record was like an explosion. All of a sudden I was back writing for myself and lovin’ it. It laid down a foundation and now with this new album, I think I’ve fallen even deeper into being an artist again, with something to say.” The new album, produced by Dave Darling, is available for pre-orders on April 28.

STREET’s musical influences run deep into retro R&B, rock ’n’ roll and multiple other genres. Her timeless lyrics continue to be reflective of current concerns, such as on “Wrap My Mind Around You,” a hip, finger-snap groove accompanies her playful juxtaposition of love’s complexities with the trivialities of reality TV. “Sex Is Easy, Love Is Hard” and “Deep” search similarly for a genuine connection in these superficial times. STREET is unafraid to alternate observational songs with more private reflections. On the title cut, she reflects that “we live and die alone/trapped inside the four walls of our souls.” To the rhythmic strum of an acoustic guitar, she begins “Undone” with a question; “Is it me or the world that seems to be unraveling?” “I see a man in the street, holding up a sign/Need Work, Something to Eat,” she continues. “Driving by, I think someday that can be could be me.” The folky lightness of the performance brings her secret rumination into a brighter light.

It has been decades since this New York-native sat at the top of the charts as one of Clive Davis’ protégées. Three major labels spotted her talent early on and signed her to successive deals. After being signed by two other labels, STREET was welcomed to Arista Records by none other than the hit man himself, Davis. In short order, two singles, “Under the Clock” and “Say Hello To Ronnie,” charted on Billboard and were in heavy rotation at VH-1 and then just as quickly, she was dropped. Later, persuaded by her longtime friend Janis Ian to move to Nashville, she mentored young songwriters, gave house concerts, opened one memorable night for Levon Helm at The Ramble at the Barn in Woodstock…and painted a few more houses, waitressed and even performed as a clown for hire!

The legendary blues artist, Ruth Brown, recorded one of STREET’s songs, “Hangin’ By A Shoestring,” on her Grammy-nominated album A Good Day For The Blues. In 2009, STREET self-released her own homage to the blues, The Street Less Traveled, which impacted the charts and inspired positive reviews throughout the blues community. And then Blue Élan Records founder, and fan, Kirk Pasich, tracked down STREET and invited her to join his roster. With her new label’s backing, STREET released My Side Of Paradise in 2016.

Last July, STREET gathered songwriter friends, including childhood pal, Janis Ian, at Nashville’s City Winery for an album release party that also served as a fundraiser for the Gilda’s Club, a charitable organization that supports cancer victims and their relatives. Gilda’s Club has a special place in STREET’s heart, having assisted her through several challenging times. STREET proudly handed a check to Gilda’s Club the following day.

Announced earlier this year, STREET’s album, My Side of Paradise, was awarded “2016 Best Indie Album” (from all genres) as well as “Best CD Female” and she herself was honored to be named “Most Deserving of Indie Music Hall of Fame” from the 2016 LA Music Critic Awards. The LA Music Critic Awards celebrate the very best of independent artists each year.