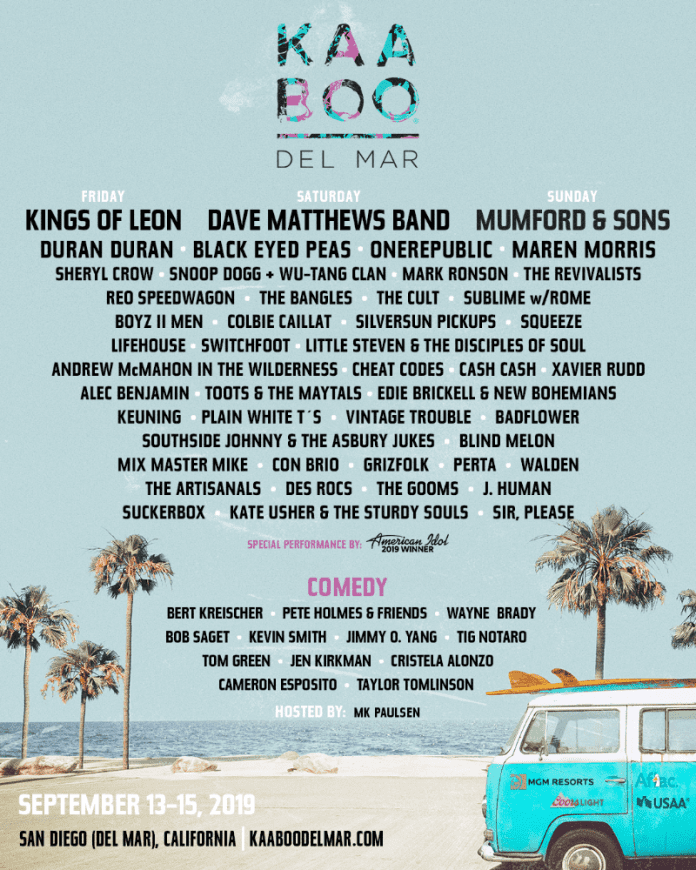 “It is thrilling to unveil this all-star lineup for what will essentially become KAABOO’s 5th birthday celebration,” says KAABOO’s Partner + Chief Brand Officer, Jason Felts. “Our signature curation of music and comedy acts will lead guests through yet another incredible weekend escape in Del Mar.”

KAABOO Del Mar solidified its edge as a leading destination music and arts festival by selling out of all passes to last year’s 2018 Southern California experience. The 2017 Pollstar-nominated festival of the year will celebrate its fifth anniversary in 2019 with KAABOO’s signature recipe of world-class music, household names in comedy, contemporary art, gourmet cuisine and craft libations, plus personal indulgences. The highly-amenitized event is conveniently located at the Del Mar Racetrack and Fairgrounds in Southern California. Celebrated as San Diego’s largest multi-day major music and entertainment festival, KAABOO Del Mar overlooks the Pacific Ocean and enjoys pristine weather, ocean breezes, and numerous easy to access lodging options.

All passes go on sale today at 7 AM PT at kaaboodelmar.com. HANG LOOSE (GA) passes will be on sale starting at $299, while HANG FIVE (VIP) and HANG TEN (VIP) passes are currently at $919 and $3599, respectively. HANG FIVE (VIP) features premium stage viewing; exclusive culinary options for purchase; private restrooms; access to the AMPLIFY Escape lounge featuring private artist performances; and more. HANG TEN (VIP) includes all the features of HANG FIVE (VIP) plus access to onstage viewing; exclusive meet and greet opportunities with KAABOO performers; complimentary beverages and food provided; golf cart access; and more. For those looking for an entirely immersive experience, KAABOO offers the ULTIMATE HANG pass. Get the full scoop at kaaboodelmar.com/ultimate-hang.

The KAABOO KINDNESS program continues to support charities in the San Diego region and across the globe. One dollar per every pass sold is donated to featured charitable partners, including global partner The Recording Academy’s MusiCares program, as well as local charities including the San Diego Armed Services YMCA, and Voices for Children. MGM, Coors Light, Aflac, and USAA are KAABOO Del Mar’s official 2019 presenting partners.

Earlier this year, KAABOO expanded internationally with KAABOO Cayman and proved that a luxury destination festival in the Caribbean is achievable with thoughtful strategy and execution. The sold-out event brought together live entertainment fans from around the world while hosting one of the largest festivals of its kind to ever hit the islands. Next up, the KAABOO brand extends into the Lone Star State this May through a partnership with the Jerry Jones Family. The May Arlington, TX festival experience will take place at the state-of-the-art AT&T Stadium, home of the Dallas Cowboys.

About KAABOO
KAABOO has shifted the festival paradigm and carved out its name among international and destination events as a lifestyle and live entertainment brand. At KAABOO, all guests receive an immersive, multifaceted and hospitality-driven experience that engages all five-senses. At KAABOO multi-day annual events, guests enjoy a world-class music and HUMOR ME comedy lineup; an on-site Contemporary Art Fair in ARTWORK plus a display of outdoor murals and installations; PALATE gourmet food and craft libations tastings; a Las Vegas-style day club called BASK; plus spa and relaxation services at INDULGENCES.

KAABOO is proud to expand its brand in 2019 to AT&T Stadium in Arlington, Texas. On May 10-12, 2019, KAABOO Texas will host its inaugural event with all of the same elements that have made KAABOO Del Mar and KAABOO Cayman an international success. With the amenities and high energy found in the Dallas Cowboys’ home base, KAABOO Texas celebrates KAABOO’s elevated live entertainment lifestyle brand in the Lone Star State. For more information, visit www.kaabootexas.com. 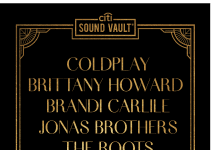