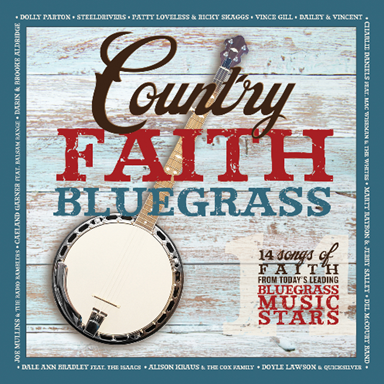 NASHVILLE, Tenn. – Country Faith Bluegrass, featuring eight new recordings and six classics performed by some of the top names in Bluegrass music, is available now across all digital platforms via Billy Blue Records and the Country Faith partnership. Physical CD copies of the 10th album from the acclaimed series are exclusively available on CrackerBarrel.com and will be exclusively available in Cracker Barrel Old Country Store® locations by Oct. 4.

Leading up to the release of Country Faith Bluegrass, Dolly Parton’s never-before-heard version of the old hymn “In the Sweet By and By,” was released as the project’s first single. GRAMMY®-nominated producer Jerry Salley and bluegrass favorites, Carl Jackson, Larry Cordle and Bradley Walker, accompany Parton on the track to sing harmony vocals as a quartet, reminiscent of an acoustic Jordanaires.

MusicRow’s Robert K. Oermann remarked, “Joined by the heavenly country choir of Larry Cordle, Carl Jackson, Jerry Salley and Bradley Walker, Dolly takes this traditional church hymn out for a soft, gentle, languid, whispery bluegrassy spin.” Wide Open Country’s Bobby Moore added, “The stacked four-piece of Carl Jackson, Larry Cordle, Jerry Salley and Bradley Walker back one of the most universally loved and spiritually uplifting voices from any genre, Dolly Parton, on a grassed-up version of familiar hymn ‘In the Sweet By and By.'”

People exclusively premiered a first listen to “In the Sweet By and By,” while Bluegrass Today’s John Lawless revealed a first look at the tracklisting for the “all-star project.” Sounds Like Nashville debuted a first listen to the album’s focus track, “Working on a Building” by IBMA Female Vocalist of the Year Dale Ann Bradley with the multi-GRAMMY®-nominated family group The Isaacs.

“Bradley and producer Jerry Salley intentionally lean into the singer’s Kentucky roots, creating a swampy rendition that’s undeniably bluegrass, as prominent banjo and fiddle accent Bradley’s earthy voice that captures the raw nature of the song,” shared Sounds Like Nashville’s Cillea Houghton. “What makes the song particularly dynamic is the presence of The Isaacs. Throughout the track, the Gospel Music Hall of Fame members send chills up one’s spine with their haunting harmonies.”

Executive produced by Deborah Evans Price, Danny McGuffey, and Dottie Leonard Miller and produced by Salley, Country Faith Bluegrass also features The Steeldrivers’ debut gospel recording, “River of Forgiveness,” written by Steeldriver fiddle player and vocalist Tammy Rogers-King and Salley. Additionally, Salley joins Shenandoah’s lead singer Marty Raybon on “My Future Ain’t What It Used to Be.” There are more originals on the album like “Walk with Me,” recorded and co-written by country music newcomer Caeland Garner with 2014 and 2018 IBMA Entertainer Of The Year recipients Balsam Range.

3. Shall We Gather at the River – Doyle Lawson & Quicksilver ***

4. Will There Be Any Stars? – Alison Krauss & The Cox Family from the album I Know Who Holds Tomorrow

8. I’m Bound for the Land of Canaan – The Del McCoury Band from the album The Promised Land

11. River of Forgiveness – The SteelDrivers ***

13. Drifting Too Far from the Shore – Darin and Brooke Aldridge ***

14. Walking in Jerusalem (Just Like John) – Charlie Daniels ft. Mac Wiseman & The Whites from the album Songs from The Longleaf Pines