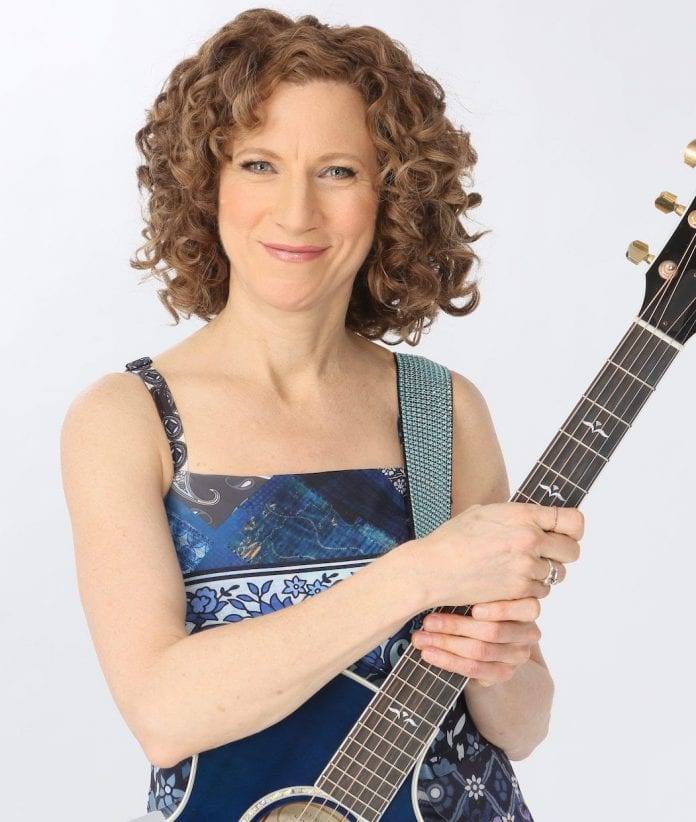 NEW YORK – Legendary children’s musician Laurie Berkner invites everyone to join her for a special Family Concert on Father’s Day. This LIVE, interactive, virtual performance for the whole family will take place on Sunday, June 21 at 6:00 p.m. Eastern Time on Laurie’s website: HERE.

While Father’s Day is often spent with extended family, that just isn’t possible for most people right now. Laurie hopes that far-flung friends and family members will be able to connect while enjoying her show together, in real time, from wherever they may be. Laurie’s pulling out all the stops to bring her audience the real Laurie Berkner show experience, with lights, camera, and sing-along action!

“I am SO excited for this virtual concert,” says Laurie Berkner. “It has been really hard not being able to tour – it’s actually the longest I’ve gone without performing a live, in-person show since my daughter was born 15 years ago! I can’t wait to be able to bring this experience of a live concert to families watching from home, with some added fun that we can have because it’s a virtual show. It feels amazing to be able to do something joyous together during this difficult time.”

Laurie Berkner will bring songs like “I Love You Daddy,” “My Family,” and “Superhero” to her Father’s Day concert, along with an array of such well-loved fan favorites as “Bumblebee (Buzz Buzz),” “Victor Vito,” “We Are The Dinosaurs,” and “Pig on Her Head.” Kids and grown-ups alike should plan to grab their instruments (or noisemakers), their dancing shoes (or socks), their superhero capes (or towels), and a stuffed animal (for their heads). Laurie will share some cool new ways to interact through a computer and even bring in a few surprises!

Laurie will be joined by Brady Rymer, The Laurie Berkner Band’s bass player, to sing a special, long-distance duet of the traditional children’s song, “There’s A Hole In The Bucket.” Rymer is also a member of the critically acclaimed jam band From Good Homes.

One of the most popular children’s entertainers in the U.S., Laurie Berkner has filled countless venues nationwide with adoring fans. Her secret? Laurie’s shows are participatory throughout; her songs get kids (and adults) on their feet to sing, clap, and dance along. She keeps even the youngest audience members fully engaged with dynamic expressions of musical joy in active songs like “I’m Gonna Catch You” and “Rocketship Run” and gives everyone a chance to catch their breath between high-energy moments by including quieter interludes featuring songs such as her classic “Moon Moon Moon.” Laurie displays an instinctive understanding of children’s natural rhythms and energy in her shows, which keeps kids enraptured and brings parents happily along for the ride.

With an average of more than 12 million monthly streams and millions of albums, songs, and DVDs sold, Laurie’s songs have become beloved classics for children worldwide. The first artist to ever appear in music videos on Nick Jr., Laurie Berkner was featured in nearly all the episodes of the channel’s Jack’s Big Music Show. Laurie recently created her own Audible Original Series titled Laurie Berkner’s Song and Story Kitchen. She has released thirteen bestselling, award-winning albums and is a familiar radio presence on SiriusXM’s Kids Place Live. Laurie has authored a number of picture books based on her songs, the most recent of which were published by Simon & Schuster. She has also written the music and lyrics for three Off-Broadway children’s musicals produced by New York City Children’s Theater. Laurie has performed at Lincoln Center, Carnegie Hall, and the White House, among many other prestigious venues.

Laurie Berkner has received tremendous critical acclaim. USA Today named Laurie “the undisputed queen of kindie rock.” Time Magazine lauded Laurie as “a kind of sippy-cup Sheryl Crow … Berkner inhabits a kid’s curious perspective in her lyrics and pens folk-pop melodies that bear repeated — very repeated — listenings. “The Wall Street Journal called Laurie “one of the most popular children’s performers in America … her music is distinctive because it speaks to kids without talking down to them, charming youngsters without boring grown-ups.” NPR’s All Things Considered declared, “Laurie Berkner is like a goddess to these children.”