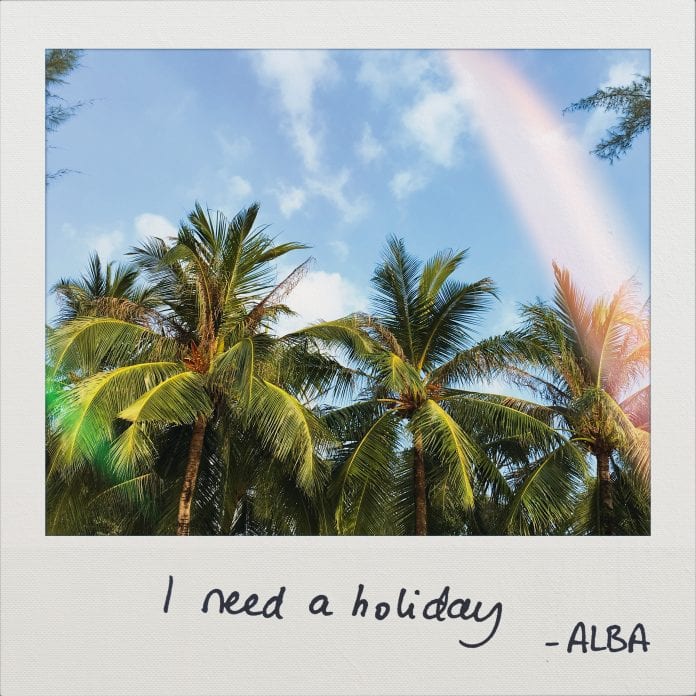 The Spanish-born and London-living singer and guitarist has developed a timeless yet fresh pop-rock sound with undertones of neo-soul, funk and R&B.

ALBA’s latest singles “Sister” and “Child of the Stars”, which released during the pandemic, have aired on radios around the globe, and received coverage from well-known publications, blogs and tastemakers such as BBC Radio, Amazing Radio and Wonderland Magazine.

‘I Need a Holiday’ was written and recorded at home by ALBA during lockdown and produced in collaboration with up-and-coming London-based music producer Ed Black, aka edbl.

“This song is an ode to escapism, figuratively and literally speaking. Quarantine forced me to get acquainted with my deeper feelings and emotions. I’m sure many can relate to this feeling of being trapped, constantly ruminating past experiences, regrets and worries, which can really damage one’s mental health. I wrote this song in the midst of this (unsolicited) journey of self-discovery in the hope of better days. I was very excited to collaborate with edbl, whom I deeply admire as a musician and producer, and who helped me take the tune to a whole new level.” – ALBA

Now available on SoundCloud, Spotify, and on iTunes