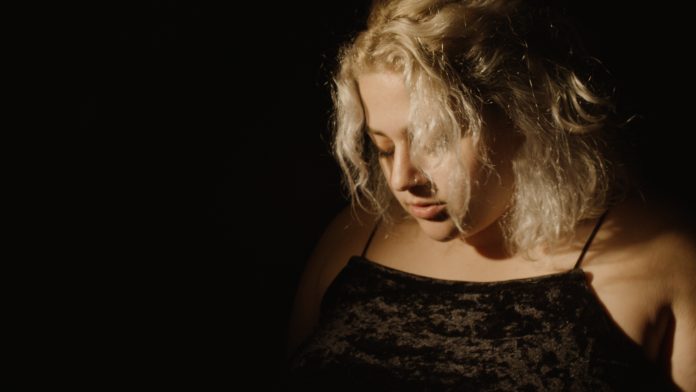 NASHVILLE, Tenn. (July 12th, 2021) – Rising indie-rock singer Alyssa Joseph releases a beautiful lyric video for her song “leaning“, which can be found on her critically acclaimed “alive” EP that dropped last month. You can watch the lyric video by clicking here.

“leaning” describes the period after she graduated college when she was forced to move back home with her parents in New Jersey and face judgment from the world while she longed to move to Nashville. The lyrics candidly expose the difficulties young millennials go through post-grad, as she declares “all my money goes to student loans and the god-damn government“.

The lyric video, which Joseph recorded while driving around Nashville, takes the song full circle. Showcasing the lyrics in the video allows viewers to understand the meaning behind this vulnerable song on a deeper level. When she sings, “they say it’s strange that I’m still leaning, but I’m still leaning” she is being honest that even as an adult she doesn’t have it all figured out and it’s okay to ask for help. The video showcases the understated beauty of “Music City” and offers a sense of hope that dreams can still come true. Even though Joseph was stuck in New Jersey living with her parents when the song was written, her dream of moving to Nashville materializes in the video.

Alyssa Joseph is a thriving singer-songwriter based in Nashville, Tennessee. She has toured through Texas and up and down the Northeast, playing at Sofar Sound shows in New York, Boston, Philadelphia, and Louisville. Her recent EP — titled “alive” and released on June 4th, 2021– received wide acclaim from the local and national press, including Guitar Girl Magazine, Music Crowns, Broadway World, and a five-out-of-five star review on Square One Magazine. She is an advocate for body positivity and creating a more diverse and inclusive space within the music industry.

You can learn more about Alyssa Joseph by visiting her website www.alyssajoseph.com.