Home News Music News GRITTY IN PINK BROUGHT THE GRIT TO NOHO WITH EXPLOSIVE RETURN TO... 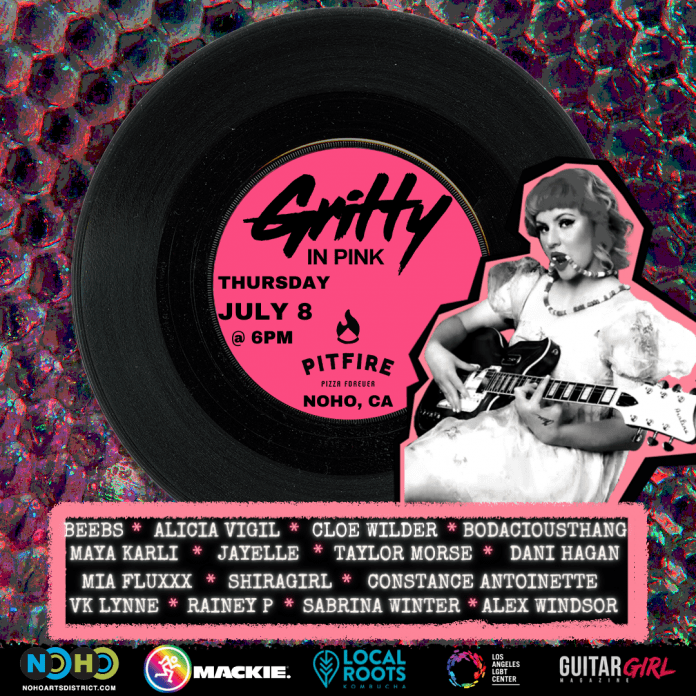 Los Angeles (July 2021): Gritty In Pink made their long-awaited return to the live stage on July 8 at Pitfire Pizza in North Hollywood. After 16 months away from the stage and many virtual shows later, the empowering female-led platform returned with a live music set. The show was sponsored by Pitfire Pizza, Mackie, NoHo Arts District, Local Roots Kombucha, Guitar Girl Magazine, with charity partner the LA LGBT Center.

DJ Mia Fluxxx got the crowd warmed up for the night with a phenomenal female-centric mix that had the audience grooving. Pop-teen Cloe Wilder opened the show with an acoustic cover of Taylor Swift’s hit “Style” and an amazing performance of her original song “I Wanna Be Alone With You.” Dani Hagan joined the stage with an electrifying cover of Ariana Grande’s “Dangerous Woman” and performed the title track from her upcoming album, “Kissing You.” Jayelle gave the crowd a taste of her new music and performed her latest single “Men Are Candy” and a cover of “Brutal” by overnight sensation Olivia Rodrigo. Beebs serenaded the audience with her soulful voice, singing “Dreams” by Fleetwood Mac, as well as original songs “Strength From The Struggle” and “Helium.”

In the second half of the show, NoHo native VK Lynne graced the stage with a cover of “Mr. Brightside” by The Killers and an original song called “Oil Meets Rain.” Maya Karli joined next, with an amazing performance of an unreleased song “The Victim Card” and Paramore’s hit song “Monster.” Next, event host Shiragirl performed two songs from Sublime “Doin Time”/“What I Got” and then premiered a new unreleased single called “Antisocial Media” which is set to be released later this month. Alicia Vigil got the crowd grooving to her band Vigil of War’s “Bite The Bullet” and The Interrupters “Give You Everything.” Bodacious Thang hit the stage with her song “Tha Light” and a rock-rap melodic version of Childish Gambino’s “This Is America.” To end the special evening, Gritty In Pink musicians all gathered on stage to sing the iconic song “I’m Coming Out” by the legendary Diana Ross.

In case you missed the pop-up show, a clip from the livestream is up on Gritty In Pink’s Facebook page. Stay tuned for more special summer announcements from Gritty In Pink on their Instagram page, as they continue their Gritty Rocks Live (GRL) live streams and announce future events.