Home News Music News Amy Helm and The Wood Brothers Cover The Band’s “Christmas Must Be... 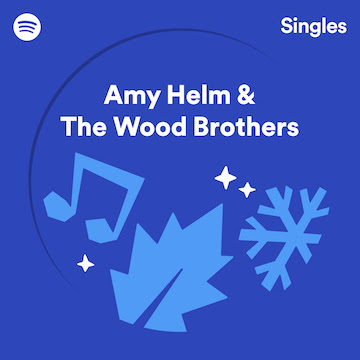 Amy Helm and The Wood Brothers announce the release of “Christmas Must Be Tonight” available today exclusively on the Spotify Singles: Christmas Collection playlist. The track was recorded at the Spotify Studios in New York City and is a cover from The Band’s 1977 album, Islands, of which Amy’s father, Levon, was a member.

“Christmas is my favorite holiday to celebrate with family and friends,” says Helm, “and I loved getting to sing this beautiful song my dad performed in The Band with my dear friends, and one my favorite bands, The Wood Brothers!”

In support of her recently released Yep Roc Records debut, This Too Shall Light, Helm embarks on a nine-city tour supporting The Wood Brothers beginning November 28, with stops in Houston, Dallas, Austin, Oklahoma City, Denver, among others. A full list of dates is below.

Praised for its “gorgeous harmonies” (Billboard) and “killer grooves” (Rolling Stone), This Too Shall Light was recorded over four days at the hallowed United Recording in Los Angeles. Working with three-time GRAMMY-winning producer Joe Henry, Helm also partnered with skilled songwriters including Hiss Golden Messenger’s MC Taylor, who wrote the album’s title track with Josh Kaufman. The album also features tracks from Allen Toussaint, T-Bone Burnett, Milk Carton Kids, a traditional glory hymn, and a cover of her father’s 1965 Levon and the Hawks song “The Stones I Throw.”