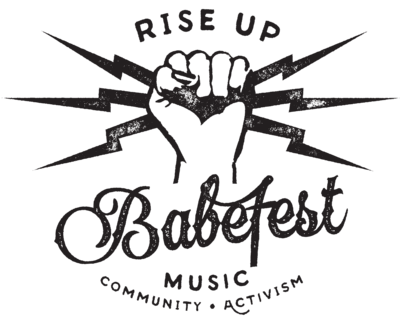 “The power to revolutionize our government and set America on a path towards peace and justice is already in our hands.”  Ani DiFranco

Tickets on Sale Today at 10 am EDT

August 29, 2018:  As the midterm elections loom in the near future, activist/feminist/singer/author Ani DiFranco is actively rounding up the troops to take action. DiFranco continues to urge those around her to “Rise Up” and get active in regards to voting. This effort is the third annual Babefest, a festival of music, community, and activism taking place September 21 at Warsaw in Brooklyn, NY. This year’s Babefest is a benefit for EMILY’s List, a political action committee that elects pro-choice Democratic women into office. Tickets go on sale today at 10 am EDT; link is here.

In addition to musical and spoken word performances from DiFranco, Babefest will feature the Resistance Revival Chorus, Torres, and Amy Leon.

The Resistance Revival Chorus is a collective of 70 women who came out of the Women’s March to sing protest songs together. They performed alongside Kesha at the 2018 Grammys.

Critical darling Torres has broken boundaries in music by owning sexuality in a way that is typically reserved for men. Her 2017 album Three Futures made year-end best-of lists in Newsweek, Noisey, and NPR.

Amy Leon is an artist, poet, and educator. Her work explores her intersectional life. She created the #selfiepoetryproject to bring more visibility to her experience as a woman of color.

Babefest will also offer a half-day training session through Emily’s List “Run To Win” program for pro-choice Democratic women thinking about running for elected office. EMILY’s List is the nation’s largest resource for women in politics, having raised over $500 million to support pro-choice Democratic women candidates – making them one of the most successful political organizations ever. Their grassroots community of over five million members helps Democratic women wage competitive campaigns -and win. At this training, EMILY’s List will guide you through the nuts and bolts of planning your run, teach you how to get your house in order, and get ready to take the first steps toward running – and winning.

The training takes place after Babefest on Saturday, September 22nd. Registration check-in will be from 9 am to 10 am, and the training will go from 10 am to 3 pm (this includes breaks).  Register here:  https://secure.emilyslist.org/page/s/20180531_email_RunToWinNYC

“Lack of voter participation has led us to the brink of disaster. Without speaking in hyperbole, voting this November is more crucial than ever before. Democratic principles, already eroded, can collapse. America is not immune. Yes, they are going to make it as difficult for us as they can. But we can overwhelm the corruption with our numbers. Let’s rise up by all simply stepping into a voting booth on the same day. Let’s think of each other and feel the power of acting together. Let’s get this party started! The great irony is that the power of a revolution of peace and justice has been right here in our hands all along. Use it or lose it, baby.  COME SUPPORT EMILY’S LIST AT BABEFEST SEPTEMBER 21! VOTE NOVEMBER 6!” – Ani DiFranco

With DiFranco’s latest release BINARY, the iconic singer/songwriter/activist/poet/DIY trendsetter returns to territory that brought her to the world’s attention more than twenty-five years ago. Ani was one of the first artists to create her own label in 1990, and she has been recognized among the feminist pantheon for her entrepreneurship, social activism, and outspoken political lyrics. Critics and fans alike have praisedBINARY, DiFranco’s twentieth album. American Songwriter raved, “DiFranco stretches musical muscles to stay inspired on Binary. She continues to speak her mind with the pride, ferocity, and integrity that has shaped an impressively rebellious career.” With an exclusive “First Listen” of the album, NPR Music claimed,  “…it could be the record that wakes you up to the world.”    DiFranco is kicking off a tour next month; tour dates are below, and more info can be found at www.anidifranco.com.