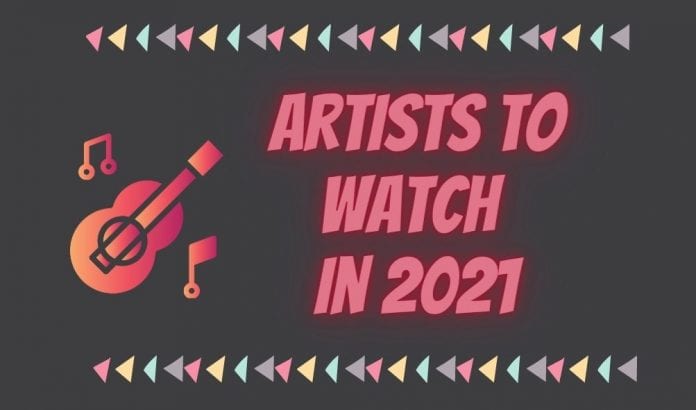 Guitar Girl Magazine put together a sampling of some artists we think are worth watching for in 2021.

Canadian Trinidadian musician Aliah Guerra knows all about DIY. The self-taught guitarist is a singer-songwriter and a producer and independently released her debut album in 2018. Guerra has completed the 2018 TDF SOCAN Creative Entrepreneur Program and was recognized as one of the program’s top five creative entrepreneurs.

Guerra utilized her entrepreneurial and technical skills to create a new app during the pandemic—the Aliah Geurra App. The app was designed to connect fans and musicians and as a resource for independent artists for everything they need to know. From photographers, videographers, and graphic design to producers, mixers, DJs, and even lessons!

Read more about Guerra in our Tone Talk Interview.

We’ve been fans of Callista Clark for years and it has been so fun watching her mature into the talented musician she has become. Wise beyond her years, at just seventeen years old, the Georgia native has signed with Big Machine Records for her debut EP Real To Me. Her inspiring online videos with which Scooter Braun (SB Projects) and Scott Borchetta (Big Machine Label Group) took notice, have amassed over 65 million views on Facebook and over 6 million views on YouTube as she’s grown her own grassroots fanbase.

I discovered Jess Jocoy last year as a contestant on the TV songwriting series, Songland. The Nashville-based Washington state native, whose songs are a combination of Americana, folk, and roots, released her debut album Such A Long Way in April of 2020. Also, be sure to check out her latest release, “Green & Gold,” as well as her EP, New Heart/Old Soul. This is just the start for Jess, and I look forward to seeing her perform live in Seattle—and photographing her set for Guitar Girl Magazine—once things get back to normal.

The Ontario-based sludge rock trio, The White Swan, is one to watch for this year. Comprised of Kittie’s Mercedes Lander (drums, vocals, keyboards, guitar), her husband Shane Jeffers (guitar), and Kira Longeuay (bass), The White Swan’s devastatingly heavy riffs, fuzzy guitars, and heroin-trip vocals promise an impending doom that you’ll want to welcome with open arms. If you’re a fan of Type O Negative, Deftones, and Alice In Chains, be sure to crank “Touch Taste and Destroy.” The three-piece also just released a soaring, more psychedelic version of Tracy Bonham’s classic, “Tell It To The Sky,” amid the pandemic, which was even vouched for by the grunge goddess herself on our IG live interview with her.