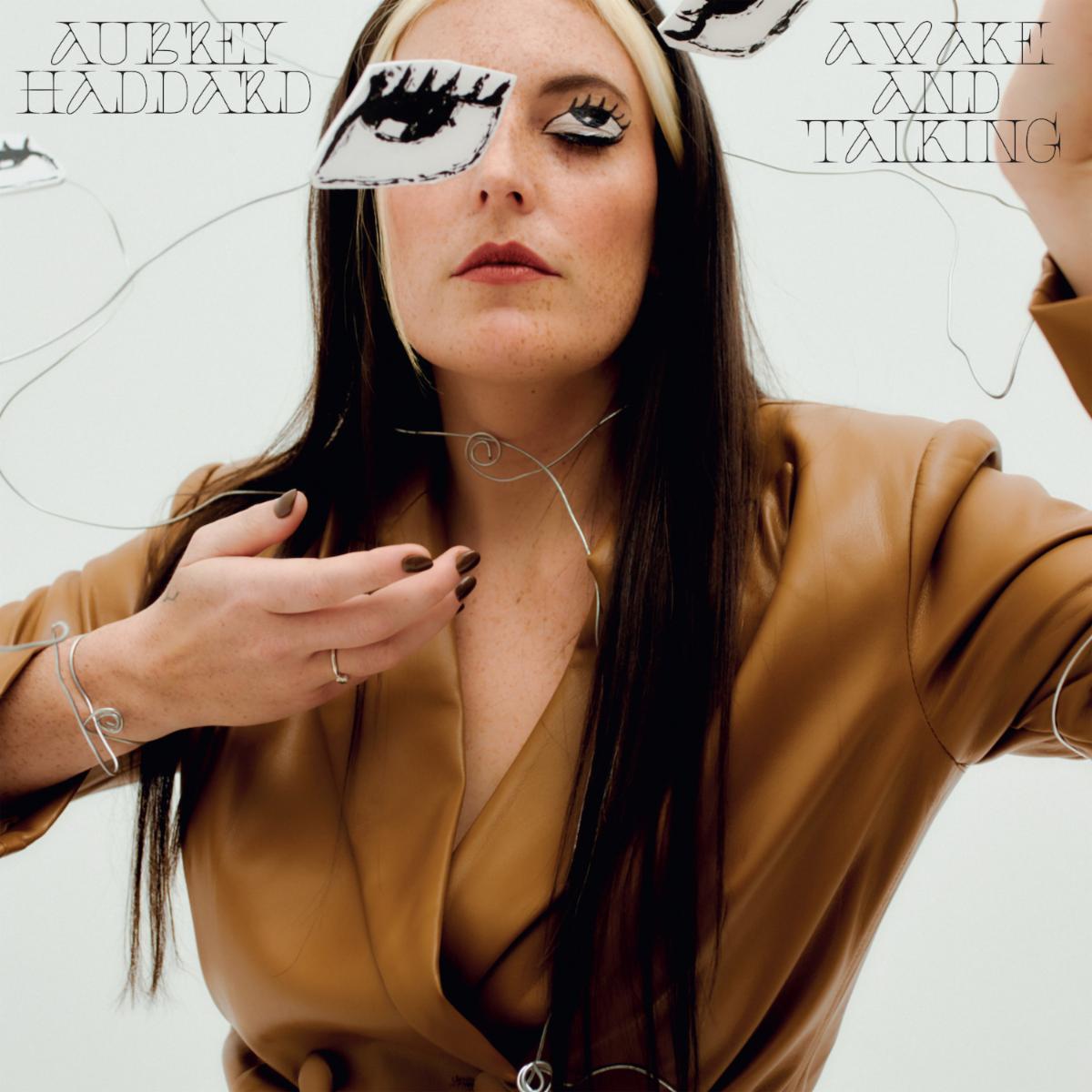 Awake And Talking, the nine track LP out now, puts Haddard’s self-examination on full display as she navigates the nuances of love and her relationship to art, and wrestles with existential questions through various lenses. While producing the album, some of the great songwriters of the late 90’s and early aughts–everyone from Stereolab and Oasis, to Björk and the Cocteau Twins–were in Haddard’s heavy rotation as their conceptual songwriting and harmonic approaches provided plenty of inspiration. With writing partner and multi-instrumentalist Charley Ruddell and drummer Josh Strmic, the trio came together in places of comfort like their weekly rehearsal space, Haddard’s childhood home upstate, and their home studio to create this collection of songs throughout the year before tracking them over the course a week in the summer of 2021. Now with a more mature, renewed perspective, Haddard’s intimate yet audacious sound is both self-assured and delicately fearless.

Haddard’s second studio album chronicles the singer-songwriter’s coming of age amidst a tumultuous reckoning with global and systemic failures from the pandemic to the climate crisis to gender inequality. Over nine robust, dynamic tracks, Aubrey Haddard aims to make sense of the world around her, attempting to discover where she may fit in. “Awake And Talking is about seeking a sense of purpose,” explains Haddard. “It challenges perception – how many ways can you look at the world before you find your place in it? It is about destiny and the journey to self-acceptance. And, like anything I create, it is about my own personal experience over the past few years. This record makes me feel powerful and confident in the face of uncertainty and it brings me a lot of joy to know that it could offer a sliver of that to anyone listening.”

“Somewhere” the album’s third track and latest single, was born from chords that Ruddell wrote that Haddard knew she had to build upon. “‘Somewhere’ had two distinct lives,” sayas Haddard. “Charley had written some chords and the groove was infectious. I built an arrangement around a few melodies but it just wouldn’t click. Finally, I let the music inform the words and sang, ‘Somewhere in this heart of mine I know..’ and the hook finally made sense.”  The track elegantly encapsulates Haddard’s discovery of her own confidence as she refuses to settle for anything less than she deserves.

The release of the LP follows several previous singles including the dense, electric “Future Boxes” and its accompanying stunning black-and-white, Jean Cocteau-inspired video, where Haddard peers into her future, attempting to imagine what lies ahead and aims to avoid making life all about checking boxes rather than living in the present. The Revue who called Haddard “one of their favorite discoveries of the last year” wrote that the track, “is a bold, trembling number that straddles the boundaries of darkness and light. A chiming, gauzy guitar competes with the brooding pulses of the bass and synth, and this battle is like the war raging in our minds.” The Revue continues, “But instead of pulling us apart, this song is riveting and addictive. It is the stimulant we need to do something we normally would not. The motivation we need to take a risk and find out if there is more to life – if there is more to our own capabilities.”

“Processing Power,” a guitar-driven cathartic release that allows Haddard to unleash emotions related to the overwhelming, non-stop flow of information in today’s 24-hour news cycle. A Journal of Musical Things called the track “rich,” and “exciting” with “instantly striking” vocals. “Green As Ever,” inspired by Michael Pollan’s book The Botany of Desire, is a bubbly, delicate mythology-inspired indie-pop track where the musician  explores her ability to tend to the garden of her life in just the way she’d like. The project’s first single, “Just A Wall.” premiered with  The Line of Best Fit, and saw Haddard examine her own reflection and begin to find self-acceptance. The Line of Best Fit wrote that it’s “sublime, emotive and anthemic,” and that “Aubrey Haddard channels Orpheus.”

After releasing her debut album Blue Part, Haddard went on to win both Vocalist of the Year and Singer/Songwriter of the Year awards at the 2018 Boston Music Awards. In the next two years, Haddard spent time both as a headliner and as a support act, gracing stages at Firefly, Mountain Jam, Waking Windows, and a slew of other premiere festivals in 2019. She has opened for several globally recognized bands, including The Dip, Ninet Tayeb, Lawrence, Liz Cooper & The Stampede, and The National Reserve. In 2020 and 2021, Haddard released four one-off singles–”Thin Line,” “Sweeter the Honey,” “Portuguese Red,” and “National Tragedy,” leading her to today’s most fully realized work yet.

Haddard has already made a splash as praise has poured in from several leading tastemakers. Glide Magazine says, “between her guitar playing and vocal strength, Haddard is definitely an artist we will be catching as soon as we can,” while Atwood Magazine wrote Haddard’s music is “blissful and bubbly indie rock… perfect for a daytime dance party.” Most recently, The Line of Best Fit calls the latest LP, “A level-headed relatability lays as the foundations for this record, a foundation she builds upon with harmonious melodies reminiscent of blues genre-benders Fleetwood Mac and contemporary glass-ceiling breakers like LP or Big Thief.” Its sound, the publication continues, is “Leagues beyond any music she’s ever released before, laden with hooks, dynamic explorations of her sound, and synth-laden melodies, she’s swapped out her soulful aesthetic for something closer to her heart as a songwriter—pop.”

With her sophomore LP Awake And Talking out everywhere now via Beverly Martel Records,  Aubrey Haddard offers a heartfelt glimpse into the human condition, exploring topics like environmental anxiety, gender inequality and impermanence to ultimately find confidence and self-assurance, with the nine potent tracks acting as an integral guiding light. Find Aubrey Haddard on Instagram, Facebook, and YouTube to stay up-to-date with all things coming from the burgeoning singer-songwriter and stay tuned for the album on vinyl available October 21 via aubreyhaddard.com.