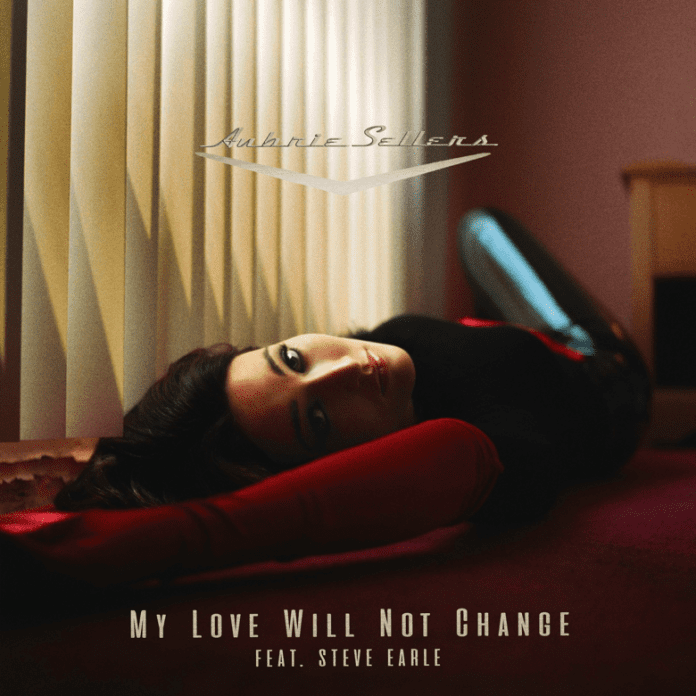 August 30, 2019 – Critically-acclaimed singer/songwriter Aubrie Sellers shares her rock-infused new single “My Love Will Not Change,” featuring legendary musician Steve Earle, as the second track from her highly-anticipated sophomore album Far From Home, available February 7th via Soundly Music. The cover, written by Shawn Camp and Billy Burnett and originally recorded by Del McCoury Band, is transformed by Aubrie and Steve into a gritty, high octane statement of unwavering commitment. “I love bluegrass, and I thought it would be fun to bring a song with unmistakable mountain soul like this into my world a little bit,” Aubrie reveals. “It’s the only song I didn’t write, but it’s something I wish I’d written. I live for straightforward, emotionally driven writing like this. When I envisioned the sound for the track, I knew there was no one else who could do it like Steve. He has always been one of my favorite artists, and getting to sing with him is not only a major highlight, it’s just plain badass.” Listen to “My Love Will Not Change” here: https://ffm.to/mlwnc.opr

Far From Home, the follow-up to Aubrie’s sensational debut New City Blues, is a sweeping, cinematic body of work. Co-produced by Aubrie alongside Frank Liddell (Miranda Lambert, Brandi Carlile, Jack Ingram) and recorded at Sonic Ranch outside of El Paso, Texas, the album explores a range of emotions that capture both the beauty and messiness of real life. Throughout her new songs, Aubrie reflects on anxiety and never quite fitting in, as well as how love ultimately roots us and makes us feel less alone (see full tracklist below).

Aubrie recently released the album’s lead single “Drag You Down,” which received rave reviews with Sounds Like Nashville declaring it “a femme fatale anthem filled with swagger” and Billboard pronouncing it “a rollicking jam that will soar in the live setting.” Nashville Scenehighlighted “Drag You Down” as a “fresh track,” and People proclaimed the single “showcases the songstress’ powerful vocals.”

Following the release of New City Blues, Aubrie quickly garnered attention for her genre-defying, self-described “garage country” aesthetic. Her debut album was declared an “eye opener” by NPR, with Rolling Stone observing “Sellers shows how sweet it is to break the rules.” Aubrie has been named an artist to watch by outlets across the board including Rolling Stone, Billboard, ELLE, NYLON, Cosmopolitan, Spotify, Pandora, and CMT’s Next Women of Country. In addition to opening for artists such as Miranda Lambert and Chris Stapleton, Aubrie has headlined shows in her own right, made high-profile performances on Late Night with Seth Meyers and The Late Show with Stephen Colbert, and has played major festivals ranging from Austin City Limits, SXSW, and Bonnaroo to Stagecoach, Common Ground, and Free Press Summer Fest. With Far From Home, Aubrie continues to boldly pave her own path in the music industry, shirking the confines of classification and painting the picture of an artist unapologetically coming into her own.