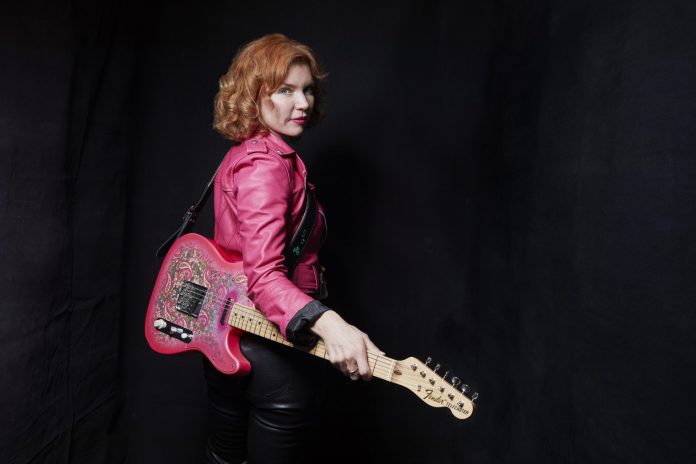 To support the release of her new disc, Foley will embark on an extensive tour schedule that includes both an official showcase on September 25 at the upcoming Americana Music Conference in Nashville, as well as a set at the Kessler Day Party Showcase on September 23 during the conference.

Foley also shot videos for three songs from the new album that were directed by Tim Hardiman, who directed the latest Black Keys video.

Pinky’s Blues is the follow up to Sue Foley’s award-winning breakout album, The Ice Queen, released in 2018. Foley’s new album is a raw, electric guitar driven romp through the backroads of Texas blues, with Foley’s signature pink paisley Fender Telecaster, “Pinky,” at the wheel. She won “Best Traditional Female (Koko Taylor Award)” at the 2020 Blues Music Awards in Memphis, was nominated for a Juno Award (Canadian Grammy), and she took home the award for “Best Guitar Player” at the Toronto Maple Blues Awards. For the last few years Foley and her band have kept a rigorous touring schedule across the USA, Canada and Europe. Some highlights were appearances at The Beacon Theater (NYC), guesting with Jimmie Vaughan (opening for Eric Clapton) at Royal Albert Hall in London, Montreal Jazz Festival, Ottawa Bluesfest  (w/ Buddy Guy), Moulin Blues (Holland), NPR’s Mountain Stage (with Bela Fleck), Doheny Blues Festival, and the Jungle Show in Austin, Texas.

Foley and producer Mike Flanigin decided to make the album in the middle of the COVID lockdown in 2020. “Mike, drummer Chris Layton and I had just finished making Mike’s album, West Texas Blues, and we needed another challenge to keep us busy,” Foley says. “And because we’d been hanging out together we were comfortable in each other’s presence, and this would be a very low-key closed session. I brought in Jon Penner to play bass, who was my first bass player and had been on all my early records. So just the four of us along with engineer Chris Bell went into the studio and recorded the entire album in three days. What you’re hearing is live, off the floor, in the moment the music was played totally spontaneously and, mainly, improvised. And, we wanted to make something representative of the Texas blues that we had been schooled on in Austin. So, we picked great songs and I wrote a few of my own to round things out. Everything on it is a labor of love.”

Some of the album’s many highlights include her takes on classics such as Lavelle White’s “Stop These Teardrops,” Frankie Lee Sims’ “Boogie Real Low” and Lillie Mae Donley’s “Think It Over,” alongside newer songs like Angela Strehli’s “Two Bit Texas Town” and Foley’s own “Dallas Man.”

Foley consider her guitar a living extension of who she is and it helps guide her through the rambunctiously-deep renditions of everything she performs. It was while playing Pinky and doing a series of live-streaming events with Mike Flanigin that much of Pinky’s Blues came together. “”During the COVID lockdown, Mike Flanigin and I had started a livestream show called ‘Texas Blues Party’,” she says, “and all we were doing was livestreaming from Mike’s house, just the two of us along with a drum machine and playing and talking about the history of Texas blues. It was a fun concept and it ended up being the foundation for both Mike’s album and mine. We called Angela Strehli one day and ended up learning some of her songs. I think she’s one of the most soulful blues singers there ever was. And besides being such a great singer Angela is also a wonderful songwriter, so I was thrilled to be able to include two of her incredible songs on this album.”

The disc’s first single, “Dallas Man,” also bears special significance to Foley. “I realized when I wrote ‘Dallas Man’ it was just about all these great guitar players from Dallas and right around there,” Foley says. “I’ve always been infatuated with Blind Lemon Jefferson and had been reading about him and working up some of his songs. Between Blind Lemon Jefferson and Frankie Lee Sims, and then working on some Freddie King and always watching Jimmie Vaughan came the idea of ‘Dallas Man.’ Stevie Ray Vaughan, Jimmie Vaughan, Freddie King, T-Bone Walker, Blind Lemon Jefferson, Frankie Lee Sims, Anson Funderburgh, Zuzu Bollin, Doyle Bramhall II, Denny Freeman and Derek O’Brien all came from that area. That’s almost a whole album right there!”

Leaving Canada as a young player, Foley knew she had to go where the music thrived. All her years in Austin, and including those when she left to learn new approaches to life, have all come together on Pinky’s Blues. “The fact that I have ended up back in Austin just seems right,” Foley says. “My home is Canada and I definitely identify as a Canadian. But I had a yearning for this music and I can’t even put my finger on why or how. It got in my soul when I was a teenager. I guess I was open and I got imprinted by the sound and the force of blues music. I saw my first blues show at 15 and I swear I’ve never been the same. I was lucky because I was able to play with so many legends before they passed away. That direct transmission, as we know, is what it’s all about. I have the kind of experience and education that you can’t even get anymore. In a way it’s a big responsibility to carry the message of these giants. But even more important, it’s about finding your own voice within this framework. In blues, that takes time. The beauty of blues, and something I’ve always loved about it, is that you get better as you get older. I’ve always been a fan of older musicians. There’s something about the message, the life experience, the whole package. If you can keep a good perspective on life, a sense of humor, and a love for what you’re doing, you have much more to give. This is when it all really happens.”

The “cabin fever” atmosphere created by the pandemic, also afforded her an opportunity to really map out her next moves. “I’ve had a lot of time to think about what the next chapter is,” Foley admits. “After being home for so long, all I really want to do is turn up and play my guitar for as many folks as I can. I can’t wait to get out on the road!” 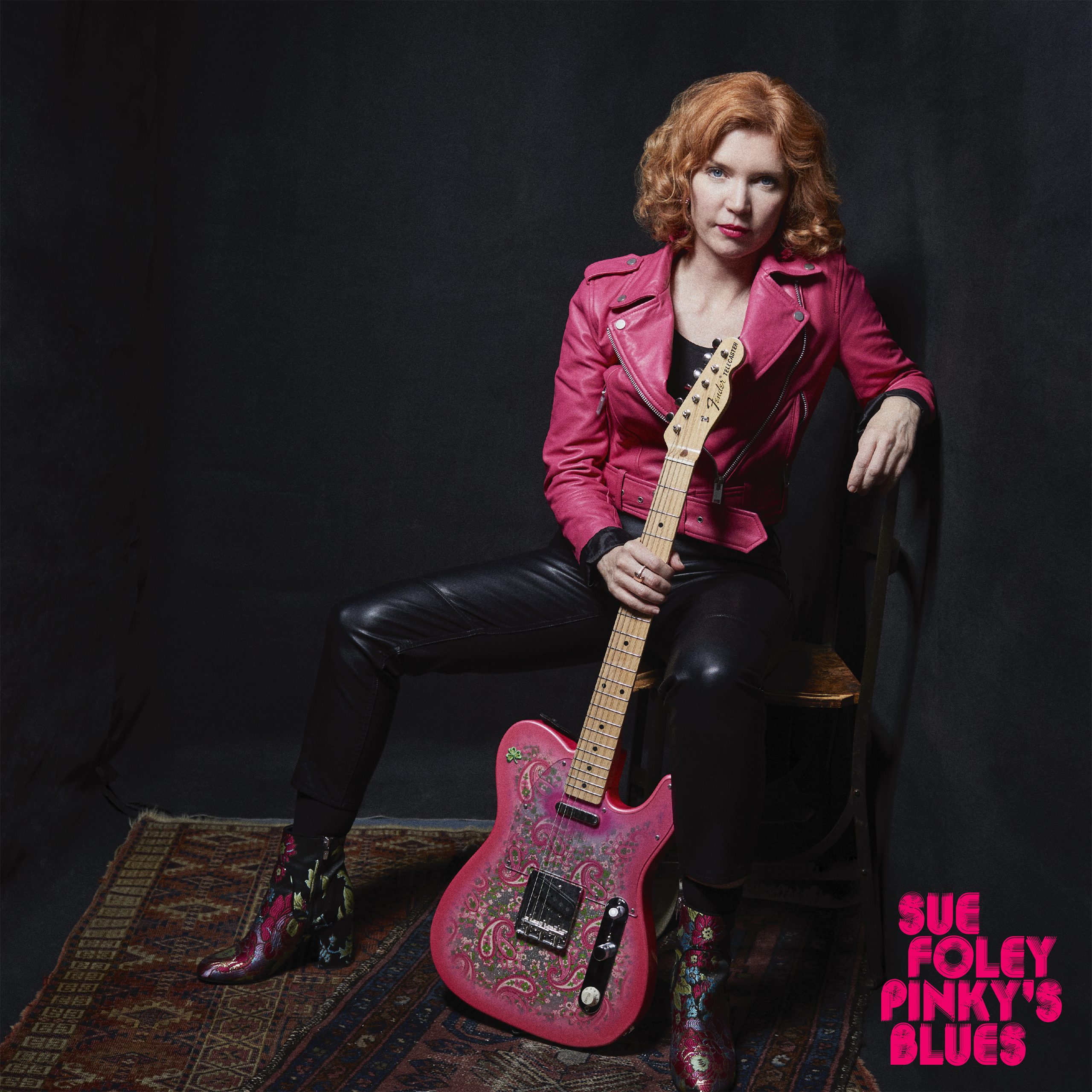