Los Angeles-based Beauty in Chaos released their debut album ‘Finding Beauty in Chaos’ today via 33.3 Music Collective offering almost 80 minutes of music, curated by guitarist Michael Ciravolo on deluxe CD and limited-edition heavyweight, colored vinyl. Ahead of that, they presented their new single ‘Look Up’ feat. Tish Ciravolo. The accompanying video was produced by Industrialism Films and directed by Vicente Cordero.

Earlier the band previewed the singles ‘Man of Faith’ feat. Wayne Hussey of The Mission and Simon Gallup of The Cure, as well as ‘Storm’ feat. Ashton Nyte (The Awakening, MGT).

Born of frustration and creativity, this project an audio assemblage curated by LA-based guitarist Michael Ciravolo and produced by Ministry’s Grammy-nominated producer Michael Rozon at Ciravolo’s own SAINTinLA Studio.

“Once I set up my turntable, I immediately listened to a bunch of vinyl from the late ‘80s 4AD period and shoegaze. Cocteau Twins, Lush, Slowdive and, of course, My Bloody Valentine.  Inspired, I picked up my guitar and run it through an excessive amount of delay and reverb.  Once I hit on that main riff, I knew it would be a perfect song for my wife to sing.  I thought she delivered a melodic and lyric homerun,” says Michael Ciravolo.

Originally from New Orleans and now based in Los Angeles, Michael Ciravolo has played guitar in Human Drama for the past 30 years, most recently on ‘Broken Songs for Broken People’ (2017). Perhaps best known as President of Schecter Guitar Research, he has also played live and recorded with Michael Aston’s Gene Loves Jezebel since 1998. In 2015, he was joined by wife Tish Ciravolo, founder of Daisy Rock Guitars.

“When you randomly meet someone and instantly know that you want to create a history with them, that is what I call magic. Everyone’s family history is different but I wanted to change what I had grown up in and create a loving home life including dogs, cats and kids,” says Tish Ciravolo.

“My fear is now, with the advent of cell phones, that people are so busy looking down at their phones they are missing life.  See the moon outside my window?  See the stars up in the sky?  There is magic in the air – don’t miss that magic, that chance in life to randomly meet someone that you want to create a history with and LOOK UP.” 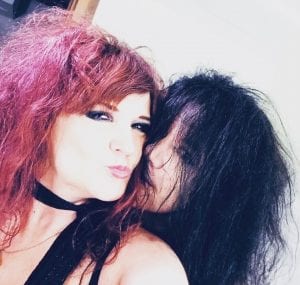 Hopping from band to band and inching ever-closer but never getting to that elusive record deal, Tish Ciravolo became the quintessential L.A. rock queen, having played in numerous bands including Rag Dolls, The Velvets, They Eat Their Own, StunGun and eventually her own band Shiksa and the Sluts.

Combining a lifelong passion for making music with a desire to “level the playing field” for dedicated female guitarists and bassists of all ages, Tish Ciravolo founded Daisy Rock Girl Guitars in 2000. Ciravolo’s dream that “every girl who wants to play guitar is welcomed and inspired to do so. This was my chance—my duty—to change the culture and provide her and all girls with a better, more inviting experience.”

Ciravolo’s focus on female empowerment and females in music has been immortalized by her induction into the Museum of Making Music, the world’s premier museum showcasing the history of the music products industry. In 2009, Tish participated in NAMM’s Oral History project and received Guitar Goddess Magazine’s “Trailblazer Award.” In 2010, Daisy Rock was inducted into The Musical Instrument Museum in Phoenix, AZ, and Tish received the Searchlight Scholar award from the Women’s Executive Leadership Summit at the University of Wisconsin School of Business. At the 2012 NAMM Show, Tish Ciravolo was honored with the “She Rocks Award.” Ciravolo has spoken at Ted Talks, the Musicians Institute, and NAMM and has been featured in national and international media outlets such as USA Today, People, Time, Newsweek, CNN, MSNBC, ABC, NBC, FOX, VH1, the Premier Radio Network, BBC Radio, and the Associated Press. 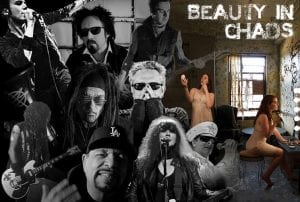 ‘Finding Beauty in Chaos’ will release on vinyl on November 30, but is already available on CD and digitally, including on iTunes, Spotify and Bandcamp. CDs and vinyl can be ordered from the Beauty in Chaos website.