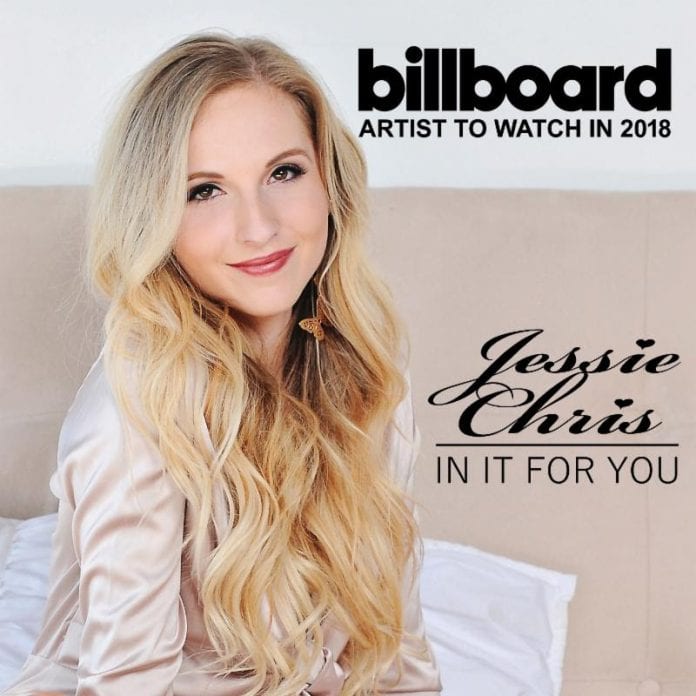 Billboard today released their annual Artists to Watch List and on it, you will find twenty-year-old Jessie Chris. Chris is coming off of a very impressive 2017 which included making her National TV Debut on TheTODAY Show when she was the first country artist to be named Artist of The Month by the legendary Elvis Duran.

Chris, who was the youngest performer at the 2015 CMA Festival returned to the iconic event in 2017 with a performance on the Radio Disney Country Stage and earlier in the year joined Kelsea Ballerini, LoCash, Scotty McCreery and Lauren Alaina on the Disney healing anthem “The Human Race” which reached #6 on iTunes Hot Tracks.

Jessie just today also released her 2nd album “In It For You” which is available on iTunes and other online music retailers, Spotify, Pandora, etc. This all comes as she is embarking on a national radio and Anti-Bullying Tour.

“It is such an honor to be part of BillBoard’s top 15 artists to watch in 2018. It’s moments like these that I dreamed of since I was a little girl with a guitar that was bigger than me,” said Chris.

“There are no words to describe how proud I am of Jessie. I saw videos of Jessie performing on Facebook three years ago and knew immediately there was something very special about Jessie, and that her voice, story, and talent needed to be shared with others on a whole new level. I reached out to her mother via private message requesting to meet with them to discuss how I might be able to help. We met at a Panera just outside of Boston and it’s been nothing but fun ever since. In fact, this is the most fun I’ve had since working at The White House, although there are times it certainly feels winning a Presidential Election is much easier than breaking a new artist,” said Jeff Gulko, Jessie’s Manager.

Chris, the victim of extreme bullying when she was younger, has made promoting an anti-bullying platform a major element of her career has visited more than 75 schools already and is scheduled to visit 100 middle schools in 2018 to share with the students her experiences with hopes of helping those that might be suffering as well.