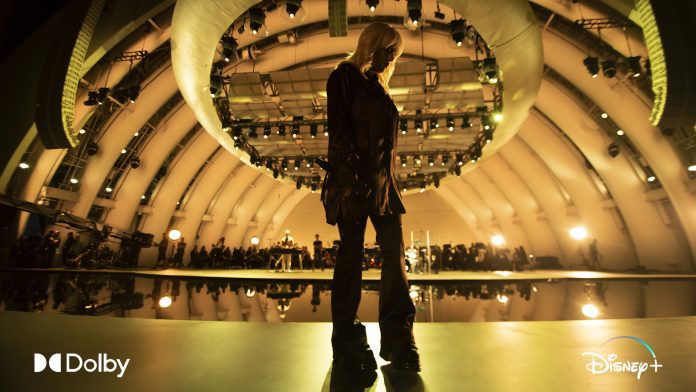 LOS ANGELES, Sept. 03, 2021 (GLOBE NEWSWIRE) — Dolby Laboratories, Inc. (NYSE: DLB), a leader in immersive entertainment experiences, announced today that Billie Eilish’s Happier Than Ever: A Love Letter to Los Angeles is now available on Disney+ in both Dolby Vision HDR and Dolby Atmos immersive audio. Dolby Vision and Dolby Atmos take this cinematic concert experience to the next level by transporting fans to the Hollywood Bowl as if they were watching the performance live on stage.

“Music is meant to take you somewhere, to make you feel transported. Experiencing music in Dolby does exactly that,” said Billie Eilish, the seven-time GRAMMY® Award-winning artist. “This is my ode to LA and experiencing it in Dolby will make you feel more connected to each song. It’s really magical and what music is supposed to sound like.”

The concert experience encompasses an intimate performance of every song from Billie’s newest album and includes animated elements that take viewers on a dreamlike journey through her hometown of Los Angeles and its most iconic backdrops, which are all brought to life in Dolby. With Dolby Vision, colors pop while images on-screen blaze brightly with dazzling highlights, incredible detail, and incomparable contrast. Fully enveloping fans inside her music, Dolby Atmos gives each song the space and freedom to reveal details with unparalleled clarity and depth. Together, fans will feel and see inside Billie’s creativity, experiencing this epic concert experience at its fullest.

“Experiencing the Happier Than Ever film in Dolby is a magical experience,” said Todd Pendleton, Senior Vice President and Chief Marketing Officer, Dolby Laboratories. “Dolby Vision and Dolby Atmos bring out the raw emotion and beauty of the concert film, showing fans a side of Billie’s creativity they have never seen before.”

Currently one of the top albums on the US charts for the past four weeks, fans can also enjoy the entire album along with other Billie favorites in Dolby Atmos now streaming on Apple Music.

“As a producer, I want to be as inventive and creative as I can to push the boundaries of what was creatively possible,” said FINNEAS, Co-writer and Producer of Happier Than Ever. “Dolby Atmos allows you to do things that would never be possible in stereo. It gives music more texture and space to breathe, which is really exciting!”