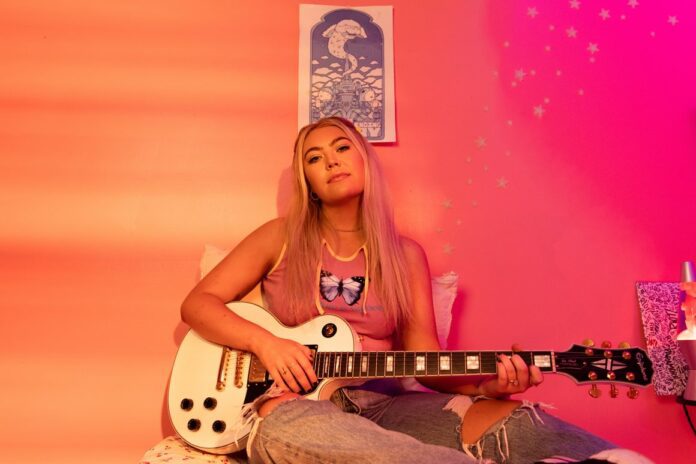 NASHVILLE, TN (February 4, 2022) — Rising singer-songwriter Bri Fletcher is channeling her inner 90’s kid with the release of “Astronaut.” Written by Fletcher, Andrew Capra and Elysse Yulo, “Astronaut” is a nostalgic track that recalls memories of carefree days when all you had to worry about was if you wanted to be a “rockstar or astronaut” when you grew up. The accompanying music video features real, home videos from Bri’s childhood and a plethora of 90’s staples. Click HERE to find “Astronaut” on your preferred platform and HERE to watch the music video.

Taste of Country exclusively premiered the video before its release stating, “Bri Fletcher can add “time traveler” to her growing list of skills mastered. With her new music video for “Astronaut,” the country singer and songwriter washes her fans and first-timers with glorious, late-’90s nostalgia.” Click HERE to view the entire exclusive.

In an “elite category of vocalists” (Music Mayhem Magazine), the release of “Astronaut” follows Fletcher’s real-life love-story song “Everything I’m Not” which is currently featured on 5 editorial spotify playlists and has racked up nearly half a million streams

Striving to continuously release new music, Fletcher has amassed an impressive catalog to her name in the past year alone. The Dallas/Fort Worth native’s work ethic mixed with raw talent and the ability to write straight-to-the-heart songs has readied Fletcher for a bright future. Fletcher recently recruited a group of 17 ladies to work in front of the mic and behind the scenes for an all-female collaboration entitled “Glow.” The women empowerment track was premiered by Sounds Like Nashville while the music video made its world premiere with CMT.com and CMT Music. Fletcher has amassed more than 1.1 million streams and is currently featured on Spotify editorial playlists Fresh Finds, Wild Country, Fresh Finds: Country, New Music Nashville, Young Nashville and Next From Nashville.

Fletcher’s “country-flavored pop-music that is as heartfelt as it is catchy” (Chalk Pit Records), has landed her on CMT, The Country Network, Heartland, American Songwriter, Country Now, Taste of Country and The Boot, to name a few.

As an avid activist for anti-bullying and the force behind her very own Teen Guidance Foundation, Fletcher brings her “DeBully” assemblies to schools across the US. Determined to use her music to empower and encourage, Fletcher hopes to leave one resounding message: kindness and worthiness for all.