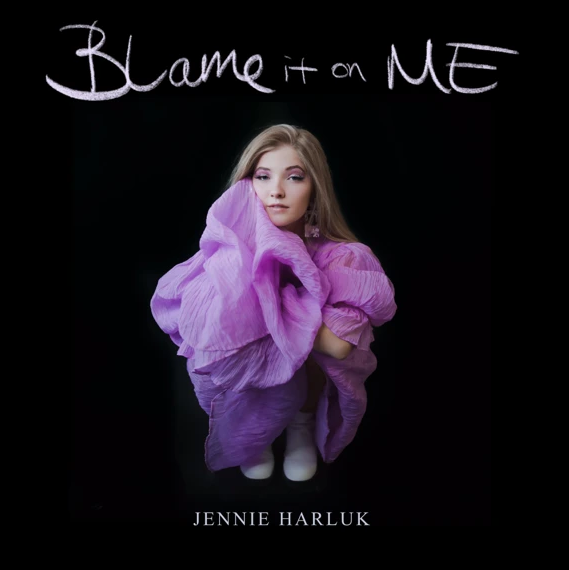 Today, Calgary-based singer-songwriter Jennie Harluk released the music video for her debut single “Blame It On Me”. The glistening “Blame It On Me” music video was entirely executed by Jennie and friends, including director Isabella Morton at Patti Falconer Agencies in Calgary, AB.

“I’m extremely proud of this video. It took a little convincing and a lot of trust, but this video was completely created by myself and my closest friends. My creative partner, Director and great friend Isabella Morton (Izzy) and I were shooting the single cover art, and I was telling her about my vision for the video. I felt like I knew exactly what I wanted, but couldn’t communicate it. I joked and said “why don’t you just film my video” and she looked at me and it just clicked – we were going to do this. So we did!”

“The video takes place at what looks like a party. Balloons, lights, streamers – a chaotic energetic mess. But I’m the only one there. This whole concept represents not needing anybody to have fun, to feel happy, to feel free.”

Born and raised in Calgary, Alberta, Jennie has spent much of her life exploring music and honing her craft. She began studying piano when she was six, just around the time her father–an accomplished musician and performer himself and Harluk’s most important musical role model–purchased a second-hand guitar for her. By age 10 she was performing regularly and writing her own songs. Her musical calling has led her to perform at an impressive range of events and venues such as the Calgary Stampede and Alberta’s iteration of the Country Thunder Festival.

Jennie is currently in the studio putting the finishing touches on her debut EP slated for release in early 2022.