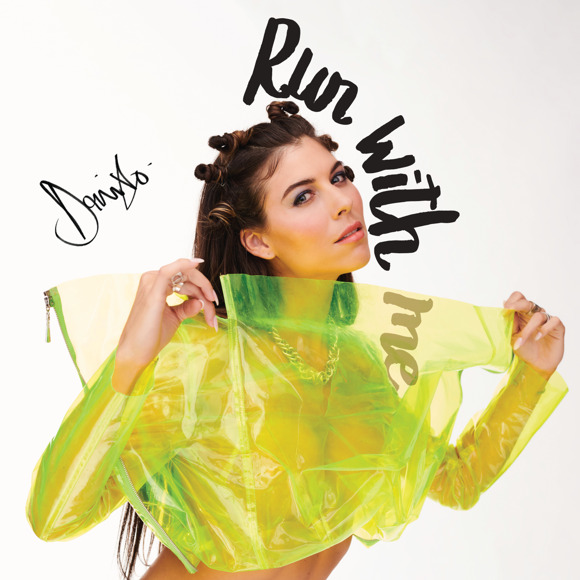 Toronto, ON – Toronto-based pop artist Dani Doucette is set to release her debut EP Run With Me on October 15 via MDC Music and all streaming platforms. The EP was produced by Milano (Tory Lanez, IconaPop), Jack Emblem (Johnny Orlando, Daniel Caesar), Thomas McKay (Michaela May, Brooke Palsson), Anthony Wright (John Legend, Eva Avila), Daniel Santos, Andre Doucette, and Dani. The 6-track EP is a collection of songs that reflect the way the mind wanders, in a sonic tribute to thinking out loud and finding your way through the fog. It’s about being transparent, being willing to show the world your journey.

“The songs on this EP have real autobiographical tones and a lot of vulnerable thoughts. It’s self-therapizing. I’ve got my whole heart on my sleeve, and it’s ready to bleed. There are parts of me never-before-seen, and then lyrics written tearfully, yet somehow in an expression of the purest joy. There are diary entries and fictional stories attached to notes to add that extra dramatic effect.  I finally feel like I am catching up to myself and understanding myself. These songs have brought me here,” said Dani.

The EP includes the focus track, “Run With Me,” an anthem to anyone that desires the freedom of leaving everything behind, and to take chances, take that leap, and move forward.

Each song on the album is inspired by Dani’s real and vulnerable thoughts including “Post It,” about realizing how easy it is to fall into the trap of fake love. Dani wrote this piece in a moment of inner reflection as she scrolled social media and saw what was  being praised and trending.

“Makin’ Moves,” is a seductive song about woman empowerment and sexuality, and “100%” is a track about honouring the love of Dani’s life. Said Dani about “100%”, “I’ve found a love I never imagined. I never thought it could possibly exist. I wanted to honor him with this song, to tell him how his unflinching belief in me and love gave me inner peace and the courage to do the things I was scared to do alone.”

Taking influences from her musical family, Dani fell in love with music as a child and started singing and songwriting at the young age of six. Before shifting to focus mainly on her music, Dani had an illustrious career in modelling. She worked with prominent brands and walked the world’s longest runway for the Kols Foundation as a celebrity participant, raising over $2,500 in donations. Dani also donated the income from two songs to raise funds for World Elephant Day.

In 2020, Dani signed with MDC Music and began to make a name for herself in the Toronto music scene by performing at various drive-in concerts, live-streamed performances, and a host of digital/live hybrid showcases during the pandemic. Dani has also found a strong digital fanbase in the ultra-popular virtual-world gaming platform, called Avakin. She later released the singles “On My Mind,” and “Selfish”, and in 2021 released “Craved”, “Dead in The Water” and was a featured artist and co-writer on the Soundhaven song “Sugar Free”.

Dani has finally found a way of catching up to herself and Run With Me invites listeners to catch up too.

Showing no signs of slowing down, Dani will be kicking things off at the North Bay ‘We Are Pride’ Concert on September 18th, following Bif Naked, and headliner and Canadian singer-songwriter icon, Serena Ryder. The evening will be hosted by northern Ontario comedian, Alice Rose. More information can be found here.

While Dani Doucette begins pouring her powerhouse and melodic vocals over the tune, she offers immense servings of lust and desire through her passionate delivery and sultry lyricism. -Buzz Music

If you are indeed searching for an artist that exerts their expertise through their soul making you feel the music, not just hear it, Dani Doucette is where you need to be. -Apex Coture Magazine