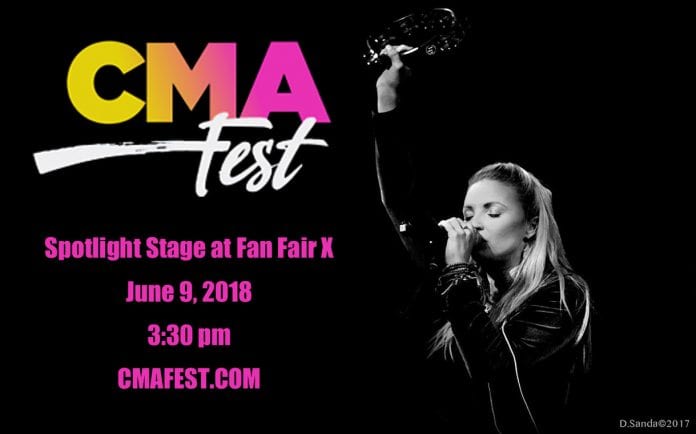 Nashville, TN (May 25, 2018) – Viral sensation and country artist Karen Waldrup, whose videos have been viewed online over 175 million times and is the subject of Country Rebel’s hugely popular weekly video series “Waldrup Wednesday,” is making her official CMA Fest performance debut this year at the Spotlight Stage at Fan Fair X on Saturday, June 9 at 3:30 pm.  In addition to her performance inside the Music City Center, Waldrup will do a meet and greet with fans immediately following the performance.

“Playing CMA fest is an honor for any artist, but especially for us artists making music in new and innovative ways via the internet and social media strategies,” says Waldrup.  “I can’t wait to see my Waldrup Worldwide Family in Nashville and make a ton of new friends.”

Waldrup is also giving her legion of fans an opportunity to participate in an intimate VIP experience on Friday, June 8 in Nashville.  Fans will hang with Waldrup at an undisclosed location where she will play all the songs from her new album, Justified, slated for release later this year.  Tickets available for purchase here.

Waldrup has spent the last few years touring the world performing thousands of shows everywhere from Memphis, TN to Dublin, Ireland and is now a true viral sensation with her social media videos gaining mass appeal and more than 175 million views.  Waldrup is the subject of “Waldrup Wednesdays,” the hugely popular weekly video series on Country Rebel’s Facebook page.

Waldrup recently won 3 Nashville Independent Music Awards for Best Live Country Performer, Best Video, and Best Solo Female Country Artist and she also landed an original song in the motion picture ‘Scales: Mermaids are Real’.  The video for her 2016 Summer song “I Got That Kind of Time” spent 5 weeks at #1 and 12 weeks in the top 5 on CMT.  Her “Trashy Crashed the Party” video stayed in the top 3 for 5 weeks straight.

Waldrup appeared on Bravo TV’s Platinum Hit with hosts Jewel & Kara Diaguardi and had music featured on Bravo TV’s reality series My Fab 40.  She was a Nashville Rising Star finalist in 2015 and was previously named a GAC Top 25 Songwriter.  Karen has been featured on NASCAR ESPN LIVE, the NFL Experience Superbowl XLVII and hundreds of other outlets worldwide.

Waldrup’s new album Justified is slated for release in 2018.