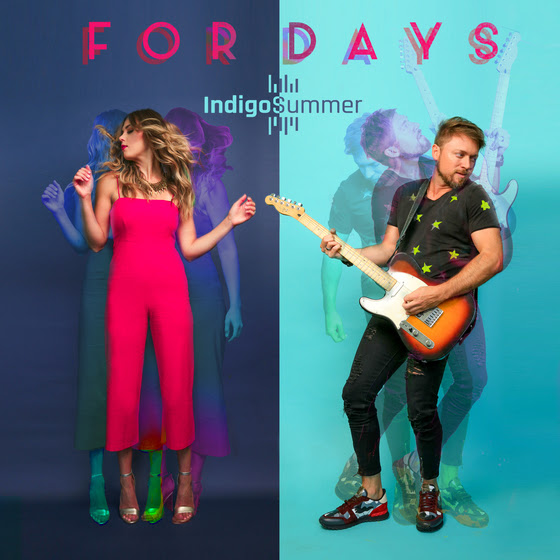 (Nashville, Tenn. – August 3, 2018) – Country duo, Indigo Summer, has released their next single “For Days,” which is now available through all streaming platforms, including Amazon Music, Apple Music, Spotify, Pandora and more. The song illustrates the story of two individuals who meet for the first time and eventually fall in love. The duo, comprised of Bryan Edwards and Hope Nix sing about the early stages of falling for someone and how those feelings develop into wanting to spend every minute with that person. Listen to “For Days” here.

“When Hope and I originally sat down earlier this year to write “For Days” we loved the idea and had a vision for what we wanted it to be. This song comes from a really honest place for both of us. We love remembering when we first started to fall for our significant others. We want to write songs that we believe in and that we feel our fans will connect with and I think “For Days” is one that they’ll fall in love with and keep on repeat!” Says Edwards.

The single was co-written by Bryan Edwards, Hope Nix, and David Thulin, who also produced the track. “When I met David Thulin and heard his previous projects, I knew that he was the right person to produce this song,” Says Edwards. The single was recorded at Three Studios in Spring Hill, TN. Nix added,“David definitely helped us push our vocals to unfamiliar territory. He encouraged me to sing some crazy high notes and I ended up surprising myself!”

Nix said, ”‘For Days’ is definitely the most ‘risky’ song we have released as a duo so far. The song’s strong pop vibe may come as a surprise to some of our fans. Having said that, taking risks is part of what makes us artists who continue to push ourselves creatively. We are so excited about this new single and hope that everyone will love it as much as we do!”

Indigo Summer is partnering with Stephen Byrum of Youngblood Films for the “For Days” music video. Edwards is extremely excited about the storyline that has been planned for the video. He stated,“it’s going to really get the message of the song across.” The music video is expected to be released in September 2018.

About Indigo Summer: Indigo Summer took country fans by storm with their self-titled debut album released in the Fall of 2017.  The album featured all original songs co-written by Bryan Edwards and Hope Nix. The full-length album added a fresh and invigorating sound to the Country music. Since then, the duo also released a “bluesy” single, “Wishful Drinking” in the Winter of 2018. Meeting at a songwriter’s night at Nashville’s famed Hotel Indigo in December of 2010 (hence part of the duo’s name), Hope and Bryan quickly hit it off with their musical similarities. The two began writing together and from those sessions, the partnership blossomed to include performing and producing music together.  As solo artists, they have performed across the country and opened for some of the biggest names in the industry, including Keith Urban, Jason Aldean, and Charlie Daniels.  As songwriters, they have had numerous cuts and TV placements, including songs recorded by Jason Aldean and featured on the Discovery Channel.