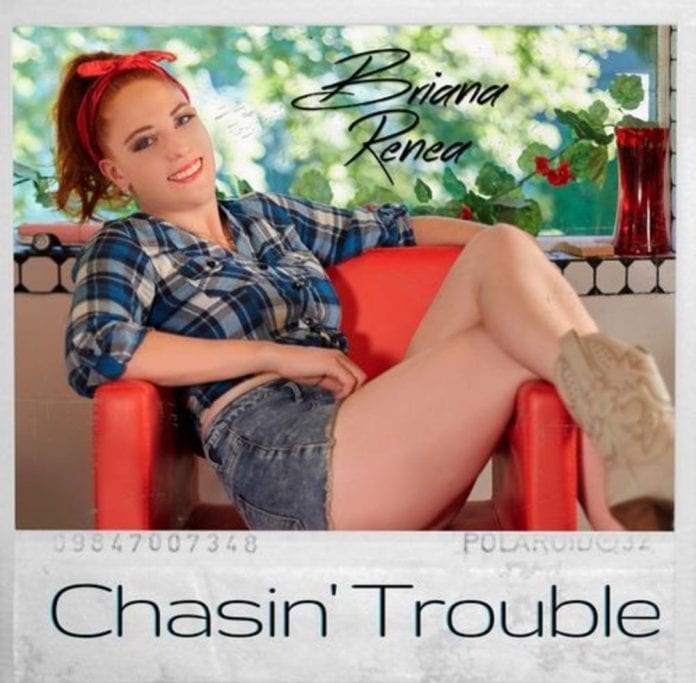 NASHVILLE, Tenn. (August 28, 2018) — Briana Renea (BR Production Co., LLC, Oregon City, Oregon), is set to make her debut on country radio with the release of her original tune, “Chasin’ Trouble.”* Slated to impact radio on October 4, 2018 [Play MPE (09/04/18)], the single arrives as a sneak peek to the Oregonian native’s forthcoming CD release. The single will be available via all major digital retail and streaming outlets (Amazon/iTunes/Pandora/ Rhapsody/Spotify) on Friday, October 12, 2018.

Co-written with Steve Mitchell (Grin Like A Dog Songs Publishing) and Will Hopkins (“She’s Killing Me”/Craig Wayne Boyd), and produced by Jason Wyatt at Watershed Studios in Nashville, the high-energy, giddy-up track snaps with saucy vocals and brazen lyrics to paint the portrait of a spunky gal who should be ID’d with a “WARNING” label. Likely torn from the pages of Briana Renea’s own journal, the storyline spotlights a female character that beams with no-nonsense independence and a sweet and salty panache. The instrumentation features hoppin’ dobro and mandolin riffs that capture the temptress’s fiery, yet classic, allure and the thrill of the chase.

“I think being a redhead comes with a ‘brand’ and the perception that we’re strong-minded, high-spirited and maybe even a little mischievous,” said Briana Renea. “That might be right! I’m a little bit of all of that and more, and that was the inspiration for this song.

You better know, I ain’t no sweetness and light
I’m not the girl your Momma’s gonna like
I’m a shot of whiskey
Little rough and tumble
If you’re chasin’ me
You know you’re chasin’ trouble

Marco Promotions and Jerry Duncan Promotions will team to spearhead the radio promotion campaign. Ed Gertler, Digital Retail Distribution Services, will oversee the digital retail and streaming campaign. The single will be complemented by a music video to be shot in Oregon—COMING SOON!

About Briana Renea:
Briana Renea (pronounced Bree-AH-nuh Ruh-Ney) comes by her country roots naturally. The 24-year-old reigns from Canby, Oregon in the heart of the Pacific Northwest.

The songstress has collaborated with Nashville writers and skilled song-crafters (Steve Mitchell Dee Briggs, Mason Douglas, Jason Wyatt, Cort Carpenter, Jason Wyatt and Tony George). Her catalog of song titles alone (such as “Love And Gasoline,” “Warning Label,” “Devil’s Dance” and “Hit And Run”) demonstrates her spirit. She’s produced three studio recordings in four short years. She recorded and released the independent project Red Lips, White Lies (May 2015) under her own imprint. Briana writes what she knows; “Dirt Side,” the most literal, depicts her childhood and teenage years growing up on a farm sporting blue jeans and cowboy boots with her hands and feet planted in the dirt. The track earned a Top 12 Best of NSAI Spring Training Award. Most recently, her original tune titled “Widow Maker” was featured in the Northwest Pro Rodeo Association finals advertising campaign

With 80s rock (Eagles/Genesis/Phil Collins/Fleetwood Mac) and 90s country music (Reba, Dixie Chicks, LeeAnn Rimes/Jo Dee Messina) echoing through the stalls and hall of the barn, Briana inherently blends the two genres in her own musical compositions and live performances. Briana has become a must-see entertainer and fan favorite at fairs, festivals and venues throughout the Northwest where she’s shared the stage with notable country recording artists such as Joe Nichols, Old Dominion, Canaan Smith, Love and Theft, Diamond Rio and Sammy Kershaw.