Home News Music News Dave Schulz releases music video for feel-good anthem “You Get What You... 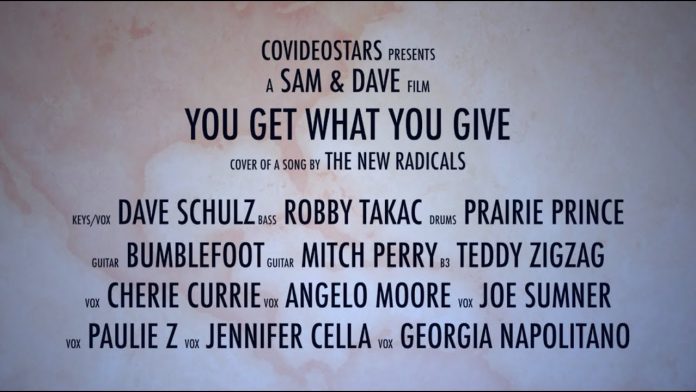 Prolific artist and producer Dave Schulz has enlisted an ensemble of rock royalty for a remake of the feel-good anthem “You Get What You Give.”

Virtuosic keyboardist, composer, and producer Dave Schulz, known for his work with a seemingly endless array of artists,  has enlisted an ensemble of masterful musicians for a remake of New Radicals’ unforgettable 1998 pop smash, “You Get What You Give.”

“I’ve known Robby [Takac] most of my life having grown up in Buffalo and of course from touring with the Goo Goo Dolls,” shares Schulz. “It was great to work with him on this.”

“In addition to Robby, I specifically chose members of different bands that spanned a wide array of styles and decades to contribute to this project,” continues Schulz. “I really wanted to appeal to as wide an audience as possible. Not only is this one of my favorite songs, but the message couldn’t be more potent than it is today. It touches on music venues shutting down. It can also be re-interpreted as a hopeful meditation against the general turmoil and frustration stemming from health and political issues dominating the world. I believe we did the song justice.”

Schulz produced the project with his friend and collaborator, Sammy Burke. Through their company, Sam and Dave Productions, Schulz and Burke have been producing videos together since just before the COVID-19 pandemic hit in early 2020. “You Get What You Give” is the latest in their eclectic series of musical collaborations called “CoVideo Stars.”

“I first staggered into Dave a few years ago when I was in kind of a dark place, and he helped me up off the ground,” shares Burke. We’ve been friends ever since. And I’m not saying that just because he paid me to. We began to collaborate on a few videos; some of these included us both performing, while on other projects, I served as sound engineer and video editor. This brought forth Sam & Dave Productions and the concept for ‘CoVideo Stars.’ Working on this particular project has been a labor of love, and I couldn’t be happier with how it turned out.”

“It’s the perfect song for these uncertain times,” declares Schulz. “It’s a positive, uplifting song with a strong message.”