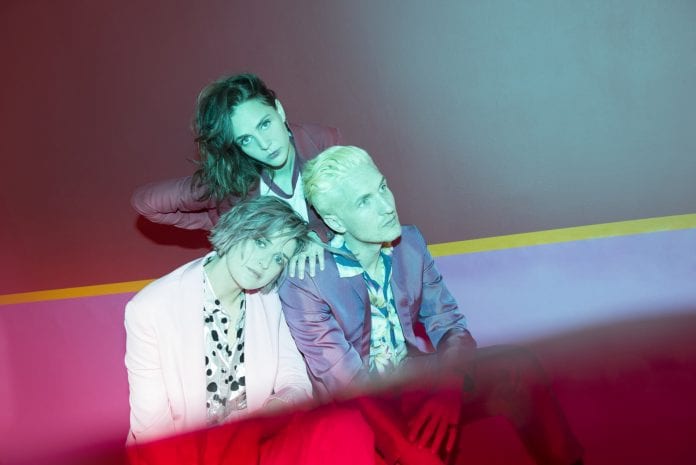 WATCH/SHARE “HEAVEN’S GOT A BACK DOOR” https://youtu.be/LPeRuAPnzyU

STREAM “HEAVEN’S GOT A BACK DOOR” https://deadsara.lnk.to/HeavensGotABackDoorPR

Produced by Tony Hoffer, known for his acclaimed work with Beck, M83, and Air, the EP sees the trio – Emily Armstrong (vocals and guitar), Siouxsie Medley (lead guitar), and Sean Friday (drums) – confidently expanding their already adventurous sonic palette with the incorporation of synthesizers and electronic percussive elements. In another first, Dead Sara welcomed collaborations with outside songwriters including Tommy English (BØRNS, Ladyhawke) and GRAMMY® Award-winner Simon Katz (Jamiroquai, Sia) while continuing to push their own creative songcraft even further. The result is a powerful new work more than capturing Dead Sara’s epic drive and resounding ambition.

“We finally have the music we’ve been looking for,” says Emily Armstrong. “We rebuilt everything to get here. There’s a lot of growth. Now it’s so exciting to see how this unfolds. I think we can reach a whole new level with these songs.”

Since the independent release of their 2012 self-titled debut, Dead Sara has quietly carved a foothold at the forefront of the 21st-century rock vanguard through a one-two punch of raucous riffing and sky-high vocals. Along the way, the trio has earned high-profile fans such as Jefferson Airplane’s Grace Slick (who praised Armstrong’s “strong, urgent sound” in The Wall Street Journal) and Muse’s Matt Bellamy (who invited the band to serve as special guests on Muse’s 2013 North American arena tour).

2015 saw Dead Sara unveil their sophomore offering, “PLEASURE TO MEET YOU,” while continuing to tour as headliners, special guests and festival favorites. What’s more, the trio repeatedly lit up the small screen with high profile live performances spanning ABC’s Jimmy Kimmel Live!, NBC’s Late Night with Seth Meyers, and The CW’s The Vampire Diaries. A wide range of live dates and TV appearances surrounding the release of “TEMPORARY THINGS TAKING UP SPACE” will be announced soon. For updates and more, please visit www.deadsara.com.