Deau Eyes, aka Richmond, VA-based singer/songwriter Ali Thibodeau, has signed with Egghunt Records for her forthcoming debut LP, Let It Leave. Due out May 8, Let It Leave was co-produced by longtime friends Jacob Blizard and Collin Pastore, whose creative efforts show up on records by Lucy Dacus and illuminati hotties, among others. The 9-song set is full of bravado: hard-won, contagious confidence radiating from Thibodeau.

Ever since Thibodeau left high school early in her junior year, she has been working to support herself, her art, and her healthy appetite for adventure. For most of her life, she has been part of the ensemble — dancing, speaking, and singing from a script. It has only been in recent years that she has listened to herself, to her original inner voice, and began to translate her wide range of experiences into her own music. Years spent in and out of theatre auditions in New York City served as inspiration for Let It Leave‘s opener, “Some Do,” which is out today along with an official music video that can be viewed/shared HERE.
Of the track, Thibodeau offers, “‘Some Do’ is a portrait of my life as an actress/singer/dancer in the audition rooms of NYC and my journey breaking out of that lifestyle. I was truly pounding the pavement as a musical theatre performer and found myself scrambling for who I was. I had a particularly brutal rejection after a few years of no work and my brother offered some sage advice, ‘Burn all your bridges and never look back. Do something with your songs.’ So I quit my waitressing job, stopped going to theatre auditions, and started busking on the street.”
“Theatre audition rooms are usually filled with hundreds of people that look just like you,” she adds of the music video. “[Video director] Ted Day and I wanted to create a world where we all looked alike, but while expressing ourselves in a daydream at our day job. We were inspired by the aesthetic of one of my very favorite music videos, ‘Fancy’ by Reba McEntire, as well as the dark campiness of David Lynch films.”
Let It Leave was recorded in January of 2018 at Trace Horse Studios in Nashville, TN. Since recording, Thibodeau has been DIY touring the U.S. with and without her band. Like Let It Leave, her live shows are sometimes loud and punky and sometimes subdued and sweet, varying from song to song. As a spectator, you understand the emotion of the music as much from her captivating stage presence as you do through her skillfully crafted song lyrics. It is clear that she puts her theater experience to good use; however, playing as Deau Eyes, Thibodeau is far from acting. When the floor is hers, she is disarmingly earnest.
Ahead of the album’s release, Deau Eyes will embark on a U.S. tour, which begins this Friday, February 14, in Washington D.C. at the Songbyrd Vinyl Lounge. She has also confirmed an official showcasing performance at this year’s SXSW with more details to be announced soon. Please see below for the initial tour dates. 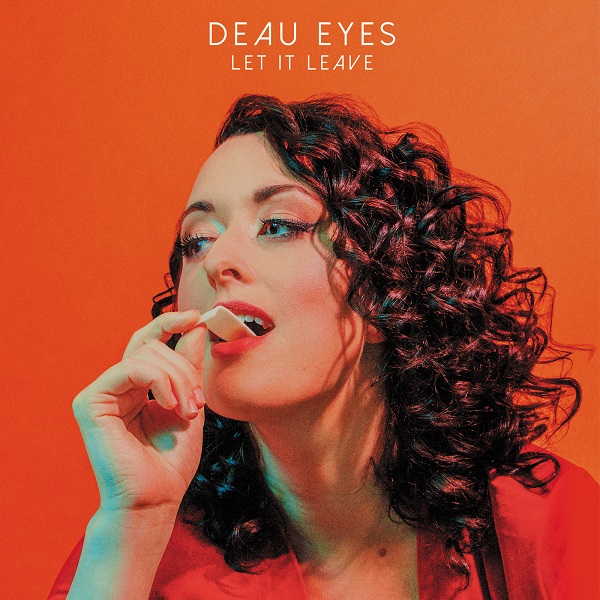