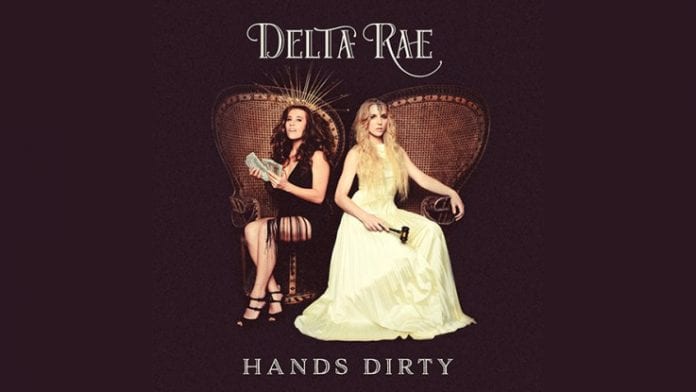 Delta Rae has never shied away from speaking their minds, especially on tough subjects. Holljes siblings Brittany, Ian and Eric were raised to educate themselves on issues affecting their community, watching their feminist mother call for change in spite of public berating. The lead-by-example message stuck with them and bandmates Liz Hopkins, Grant Emerson and Mike McKee as a cornerstone of their group – to make music that matters on whatever platforms available. As political tensions rise, the #MeToo Movement unfolds and new generations head to the polls, the six-piece knows the importance of getting your “Hands Dirty.” Brittany (lead vocals) and Ian (vocals, guitar) penned the song to implore fellow “persistent resistors” to plead for social equality and activism. Get “Hands Dirty” now at digital retailers: https://DeltaRae.lnk.to/HandsDirtyPR.

Sharing the genesis of “Hands Dirty” with fans through a personal essay, Brittany explains how through dark times she found strength. She hopes these words will ultimately encourage people to get out and vote for the midterm elections next month, empowering marginalized groups.

I have seen the other side of the mountain
Where every queen will be afforded her throne
And I will stand beside my sisters
And all persistent resistors
They’ll say I knew it would come true
And I’ll say darling, Me Too.

I was sexually assaulted when I was 13. I won’t go into the details, even though I remember them and the trauma vividly. My adrenaline kicks in, even now, thinking about it 16 years later. When it happened, the first person I confided in was my friend Liz, who was like a big sister to me. She told me to tell my brothers, Ian and Eric, and they urged me to tell our parents. I did. A year later I dropped out of high school. I went to community college and graduated from UC Berkeley before eventually moving to North Carolina, into a big house in the middle of the woods with Ian, Eric, and Liz, and finding our rhythm section, Mike and Grant. That fall we started Delta Rae, and my whole life changed.

But, I can’t say I never looked back. I will never be able to forget the assault. My life changed then too. I was lucky to be believed and to have the support of my close friends and family. And I, like most women who say “Me Too,” didn’t quit on myself after the first assault or after countless other times experiencing misogyny, harassment or violence since. We just keep working.

My brother and I wrote “Hands Dirty” because women in America are doing just that every day – tirelessly working at our jobs, pursuing our education, running for office in record numbers in the 2018 election. We create beautiful art, raise children, start businesses, teach young people, save lives. We keep pursuing our goals as though nothing is wrong, but something IS deeply wrong.

One in three women have been the victim of sexual violence.* On top of what we are trying to accomplish as individuals, we are still fighting collectively to be seen as human beings. As equals. Women are not victims, but we have been victimized. But the even more complex truth is that it’s not just women who are being abused. One in six men also experience sexual violence, and the likelihood grows based on your economic status, race, sexual orientation, disabilities or whether you’re an immigrant.*

The real fight is not between genders. The fight is against institutional corruption that reinforces toxic masculinity and ignores or excuses sexual violence. That’s why we need to all rally together as a united front to dismantle a broken system and disrupt the status quo of government, corporate industry and popular culture.

Delta Rae is a band fronted by two strong women, and backed by four feminist men. There are people who look to Liz and me as role models, but there are days when I don’t feel strong enough to be a role model for anyone, when the shame and rage of my experiences as a woman threaten to overwhelm me. The show must go on, and it does thanks to our fierce fans, who give me back a belief in myself. But most women don’t get applause at the end of the day.

We are seldom told we’re powerful. In fact, we are often told the opposite from the time we are very young. Now more than ever – thanks in large part to the #MeToo movement – brave women have been raising their voices, creating new awareness of the old, ugly reality that many of us have known since childhood. We wrote “Hands Dirty” because we refuse to give up on the inevitable, equitable future. We believe that women will rise and claim our place as leaders in this world because the future is up to us – as women and for anyone who believes in equality. Women are not a monolith, we have diverse beliefs, but we all will benefit when women are in positions of power — representing our diversity of experiences and inspiring the next generation to further the progress.

This November, we have the opportunity to get an historic number of women elected. Let’s do it by getting an historic number of women voting in the midterms and beyond. Volunteer with Rock The Vote, HeadCount, Emily’s List or one of the many great organizations helping us to all raise our voices. Speak up about the causes that matter to you. Inspire your friends, coworkers, classmates, family and neighbors to vote.

If you’re ready for a change… Me Too. Let’s get our HANDS DIRTY.