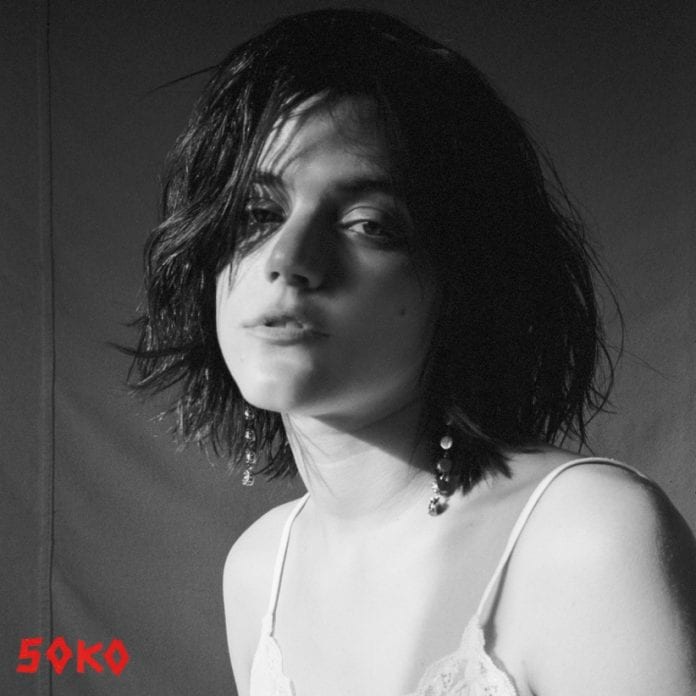 SOKO says of “Blasphémie; “This is the first song I’ve ever written in French. Essentially this song is about taking something beautiful and ruining it, and knowing you ruined it, but there is nothing you can do.” To the English listener, the song is quiet, dreamy, and haunting. To the French listener, there are dark lyrics that are spoken by few, but felt by many…

“I’m so afraid to die alone
To fall asleep
Without ever waking up.
Without the familiar embrace
Of your skin that has no mystery”

SOKO made her full-length debut with the 2012 album I Thought I Was An Alien, which Stereogum praised as “gorgeous, ethereally plaintive.” The track “We Might Be Dead by Tomorrow” was featured in Tatia Pilieva’s video “First Kiss.” After the video went viral, the song entered the top 10 of the Billboard Hot 100 and topped Billboard’s Streaming Songs chart.

Her sophomore album, My Dreams Dictate My Reality, was released in 2015 and landed her on the covers of such magazines as NYLON, Dazed, L’Officiel and At Large, to name a few. The album included such songs as “Who Wears the Pants??” plus “Monster Love” and “Lovetrap,” which featured Ariel Pink. Pitchfork observed, “brimming with nervy, post-punk verse, defiant swagger, and the blackest of humor – [My Dreams Dictate My Reality] feels like her proper coming-out party.” SOKO has also collaborated with such artists as Ariel Pink, Beach Fossils, The Brian Jonestown Massacre. She received her second César nomination for her lead performance in the 2016 French film The Dancer.