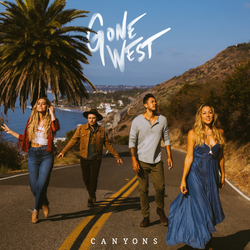 On May 28th, Gone West will perform as part of a virtual graduation party & summit for 2020 women graduates. The ultimate virtual graduation event will be emceed by Bachelorette Kaitlyn Bristowe, includes guest speakers surfer Bethany Hamilton, Olympian Missy Franklin and is hosted by SheFactor who wanted to show their support to the millions of women graduates who won’t be able to walk across the stage to receive their diploma this year.

GONE WEST will launch the release of their debut album Canyons with an interview and performance on CBS’s “The Talk” on June 12th. “The Talk” airs weekdays 2 pm ET, 1 pm PT/CT on CBS. The 13 songs on Canyons, were all written by Gone West, and 9 of the 13 tracks on the album were produced or co-produced by Gone West. Additional producers and songwriters include Jamie Kenney, Liz Rose, Jimmy Robbins, Eric Arjes, Nathan Chapman, Alysa Vanderheym, Tom Douglas, and Summer Overstreet.

Gone West is available for interviews. Please email to request a streaming copy of the album for review.

Gone West announced the June 12 release of Canyons during the performance of their track “What Could’ve Been” on The Today Show.  They appeared late last year on Kelly & Ryan. Canyons is available for pre-save with an instant grat track, “Slow Down“. The release of their album follows a whirlwind year with the 2019 release of their EP Tides, which impacted immediately and earned 31.1 million streams for the project and reached No. 7 on the Billboard Heatseekers Album chart and Country Airplay top 30 single “What Could’ve Been“.