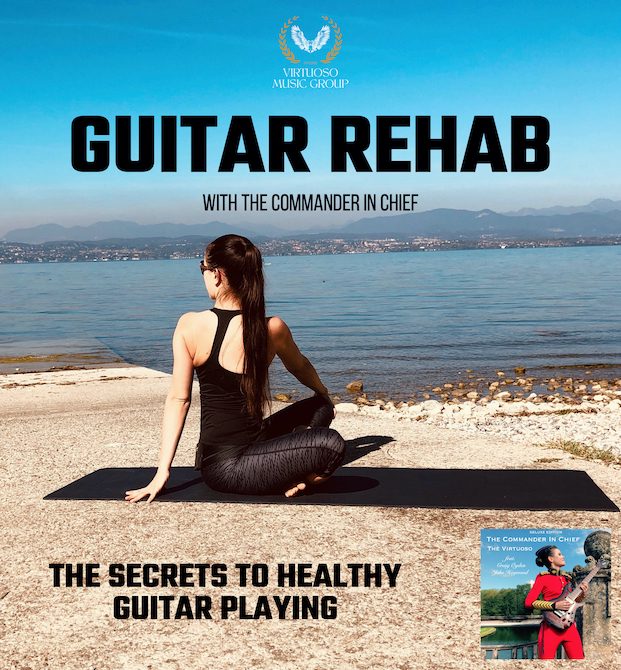 Based on her harrowing experience with a debilitating shoulder injury, and the long recovery she went through, 7 string guitar virtuoso, singer, songwriter “The Commander In Chief” has launched a new online course called Guitar Rehab. The course is created for guitarists who wants to prevent injuries, through healthy routines, and for injured guitarists who wants to recover.

When a guitarist gets injured, it is not only the high expenses for treatments with osteopaths, chiropractors, doctors and physios that hits them. It is also the absence of income from having to stop playing. The total cost, both financially and healthy wise can be devastating. The Chief says that she wants to help her fellow guitarists so they can prevent injuries so they do not have to go through the hell she went through.

The Course consists of 3 modules, with more than 20 videos in total, PDFs and checklists.

She shows her fellow guitarists her daily routines when it comes to stretches, exercises specifically for guitarists and also mental training for how to cope with injuries.

She was the first guitarist ever to record some of the most challenging pieces written for violin virtuosos: “Zigeunerweißen Op. 20” and “Introduction and Rondo Capriccioso” – in addition to her guitar duel version of Paganini’s “Caprice 24.”

A pre-order campaign for Guitar Rehab has been launched with official release date on October 18th. One of those who pre-order will get a free private guitar lesson with her. The pre-order offer is only €47 for the course.